<< Ivermectin for Pets: All You Need to Know

Skipping Doses and Delaying Treatment: Will Drug Prices Continue to Rise in 2021? >>

Parents Killed by COVID-19 and the Grief of the 40,000 Kids Left Behind 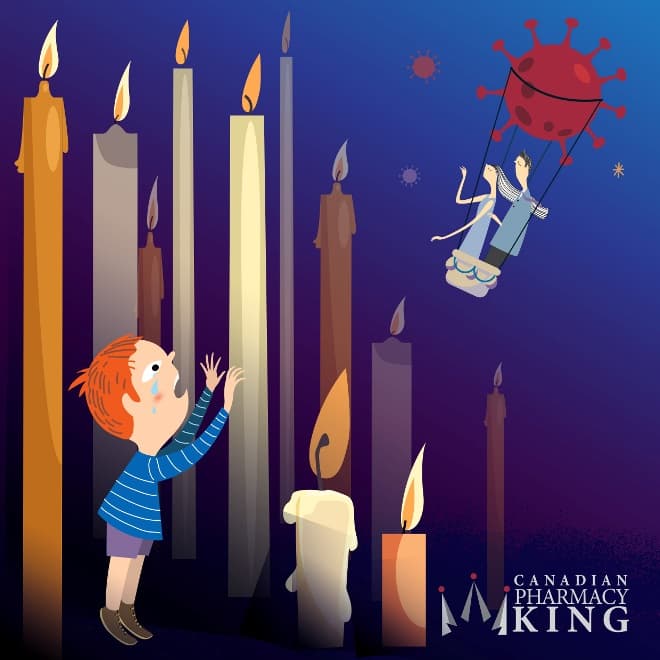 When people think of COVID-19 deaths, people typically envision an older person, maybe even an older person in a care home. And while many people who have died of COVID-19 are older, about one in five COVID-19 deaths are of people under the age of 65. These are average, working people, many of whom have children. And, unfortunately, the children left behind experience the particularly devastating loss of a parent. And the impact that a parent’s death can have on a child can be long-lasting.

How Many Parents Have Been Killed by COVID-19?

There are no direct statistics on how many parents have died of COVID-19, but statistical models have been used to create estimates. As of February 2021, it’s estimated that 40,000 children have lost a parent to COVID-19. As a comparison, 3,000 children lost a parent in the attacks on September 11, 2001.

Black children are disproportionately harmed by these parental deaths as they represent 14 percent of children in the United States but 20 percent of those losing a parent by COVID-19.

It should be noted that these estimates don’t take into account deaths of nonparental primary caregivers.

What Normally Happens While a Child Loses a Parent?

Children think about death differently than adults. (Note that the term “children” refers to children 17 and under.) According to the American Academy of Child and Adolescent Psychiatry:

“Preschool children usually see death as temporary and reversible, a belief reinforced by cartoon characters who die and come to life again. Children between five and nine begin to think more like adults about death, yet they still believe it will never happen to them or anyone they know.”

Because of these differences in thinking, death of a parent can hit a child particularly hard. It is important to realize, though, that children do grieve and it’s important to allow time for them to do so. Some children feel immediate grief or persist in the belief that the family member is still alive. Children may also act more infantile when a parent dies. Additionally, a young child may blame themselves for the parent’s death, believing they caused the death of the parent because they once wished their parent dead when they were angry. And while these things are hard to get through, they are considered typical.

Once a child has accepted the death, they are likely to display signs of sadness over a long period of time often at random times but also during occasions such as birthdays and holidays. Anger is also a natural reaction. Often this anger is expressed at surviving family members. This anger may be shown through boisterous play, nightmares, irritability, or other behaviors.

Severe Reactions When a Child Loses a Parent

Long-term denial of the death or avoidance of grief can be unhealthy and can later lead to more severe problems. According to the American Academy of Child and Adolescent Psychiatry, children who are having serious problem with grief may experience:

• Inability to sleep, loss of appetite, prolonged fear of being alone

• Acting much younger for an extended period

• Repeated statements of wanting to join the dead person

• Sharp drop in school performance or refusal to attend school

And while the above may happen with any kind of grief, children who lose a parent specifically are at a higher risk for the above and for a number of negative mental health effects. Among other things, kids who lose a parent are at elevated risk of:

And, unfortunately, many of these risks continue into adulthood.

What Happens When a Child Loses a Parent to COVID-19?

A child can lose a parent in many ways but a child losing a parent suddenly may have a more severe impact on the child’s mental health. A sudden parental death such as in the case of death by COVID-19 may be particularly traumatizing for children and leave their surrounding families ill-prepared to deal with the fallout. To make things particularly complicated, COVID-19 deaths are occurring at a time of social isolation, institutional strain, and economic hardship. All of this can leave children without the supports they need in order to process the death of their parent most effectively.

Children who lose parents to COVID-19 are also at risk of developing something known as prolonged grief, also known as complicated/complex grief, pathological grief, or traumatic grief. While little is known about prolonged grief in children and adolescents, it is thought a minority develop it after a devastating loss. Research suggests that more children than adults may develop prolonged grief.

• A sense of disbelief regarding the death

• A sense that life is meaningless

In the case of prolonged grief, these symptoms are present to a distressing or disabling degree at least six months after the death of a loved one; and what’s more, symptoms tend to get worse over time rather than better. Prolonged grief is associated with persistent negative effects on health and quality of life. Prolonged grief is separate and distinct from standard grief, depression, or PTSD although prolonged grief may predict the future presence of PTSD or depression in bereaved youth. Risk factors for developing prolonged grief are thought to include:

• A history of prior trauma or loss

• A history of a mood or anxiety disorder

• A lack of support after the loss

One study showed that 51.5 percent of children and adolescents who received some form of psychosocial care after the death of a parent met the criteria of PTSD. And while this is shocking, what’s worse is that higher levels of PTSD were associated with greater levels of depression, prolonged grief, and functional impairment. In other words, many children find the death of a parent not just to be a loss, but to be an actual trauma. Although there is no violence associated with a parent’s death from COVID-19, that does not preclude it from being experienced as a trauma.

While PTSD in children can have many symptoms, the most common tend to be:

• Upset at reminders of the death

(Note that a cluster of symptoms beyond the above must be present for a diagnosis of PTSD.)

PTSD in children is more prevalent in girls and in older children. Girls also tend to experience more severe PTSD.

What Do Children Who Have Lost a Parent to COVID-19 Need?

Each child is different, of course, but there are some techniques that may help a child who has lost a parent to COVID-19.

Children should not be forced to go to a funeral if they are scared of attending it. A plan to honor the parent who has died can be important, however. This may include:

Some children can grieve and move past the death of a parent due to COVID-19 on their own, but some other do require professional help. Getting help from a psychiatrist or psychologist who specializes in pediatric mental health may be the best course of action for children who have trouble moving beyond the grief six months or more after the death or for children who are having serious functionality impairment.

There are several types of help that are available for children experiencing grief after losing a parent to COVID-19. Supportive counseling is a psychodynamic approach that can help a child through the grieving process. It has shown to produce moderate to large effects sizes for those experiencing prolonged grief.

Another option is cognitive behavioral therapy (CBT) for children experiencing grief after losing a parent. Versions of CBT specialized to help with grief are available and one CBT program known as CBT Grief-Help actually showed an ability to offer greater reductions in prolonged grief symptoms, PTSD symptoms, and depression symptoms at six and 12 months after treatment. In this case, this positive outcome was seen after only nine sessions. It’s important to note that parents, too, received counseling at the same time as their children in this study.

It is possible, when all else fails, that a child may need psychiatric help in the form of medication to help with severe grief symptoms like those seen in PTSD or depression. There are no studies that indicate which medications might be best in the child population but in the adult population two selective-serotonin reuptake inhibitor (SSRI) antidepressants are approved for the treatment of PTSD. They are:

Other SSRI antidepressants like fluoxetine (Prozac) or citalopram (Celexa) may be selected in the case of depression in a child. Tricyclic antidepressants (TCA) have also been studied in children and have been shown to be useful but are no longer considered frontline treatments as SSRIs send to be better tolerated.

If a antidepressants is used for a child, the drug should always be used at a low dose and the raise gradually. Additionally, medication used alone is rarely able to help a child fully recover. Therapy and medication should be used in conjunction.

It’s important to note that in many cases, the risks of antidepressant medication for children are seen to outweigh the benefits. According to the UK Medicines and Healthcare Products Regulatory Agency (MHRA), only fluoxetine has shown to have a positive risk/benefit ratio.

Other medications that may be used to clinically treat symptoms such as PTSD symptoms in children include:

• Alpha-adrenergic agonists (such as guanfacine [Intuniv] and clonidine [Catapres])

• Mood stabilizers such as carbamazepine (Tegretol)

No matter what a child needs, though, getting through the grieving process is possible, even when it’s a parent that has been suddenly lost to COVID-19.