Home | Blog | Is There A Link between Poverty and Depression?

<< Stephen King – 23 Fascinating Facts About the King of Horror

Arrival of Menopause? Your Mental Health Might Take a Hit >>

Is There A Link between Poverty and Depression? 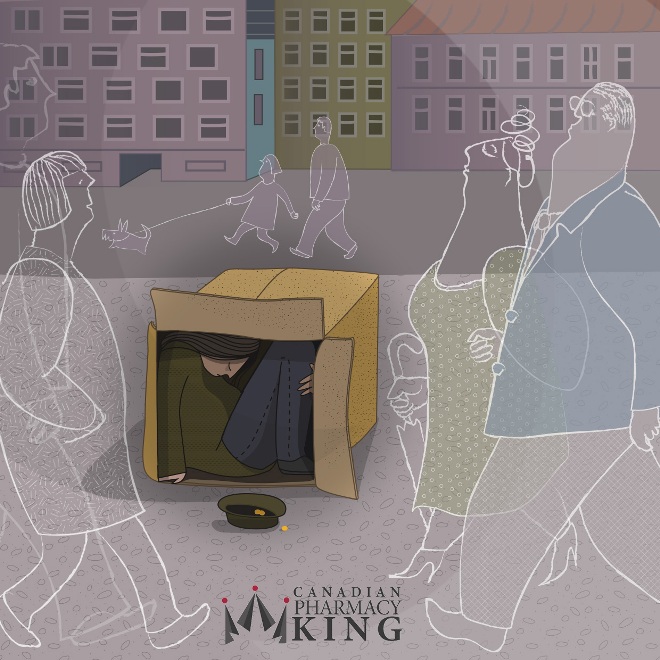 "The biggest enemy of health in the developing world is poverty" – Kofi Annan, former Secretary-General of the United Nations

Poverty is defined in different ways by different organizations and different countries. For example, Dictionary.com defines poverty as:

In terms of looking for the links between mental health and poverty, though, this definition is too vague to be adequate. Another definition, as outline

by the Canadian Mental Health Association is:

“the lack of sufficient income to provide for the basic necessities of life, consistent with the norms of the society in which one lives.”

“Nationally and internationally, there is growing recognition that poverty involves more than just income deprivation. It can also extend to (or result from) exclusion from essential goods and services, meaningful employment and decent earnings, adequate and affordable housing, safe neighbourhoods with public amenities, health and well-being, social networks, and basic human rights.”

Poverty in the United States

For a specific definition, one can look to the United States as their definition of poverty is simply living below what they set as the “poverty line.” For example. A family of two adults and two related children have a poverty threshold of $25,465. If a family makes less than that (before taxes) then they are considered to be living in poverty. A single person needs to make more than $13,064 to be living above the poverty line. It should be noted that geographical region (such as rural vs urban) is not taken into consideration when the poverty line is calculated. This skews things dramatically as living in a major urban center is much more expensive than living in a rural setting.

The official rate of poverty in the United States is 12.3%, or 39.7 million Americans. Included in that, is the 5.7% of people – 18.5 million people – who are in deep poverty, which is considered to be an income that is less than 50% of the poverty line. (2017 estimates used as that’s the latest data available.)

The poverty line is also calculated in Canada but it changes depending on what the community size is. For example, in rural areas the poverty line is $13,735 for a single person but this is raised all the way to $20,998 for a single person living in a community that has more than 500,000 people. An individual’s income is calculated after taxes in Canada.

The official rate of poverty in 2017 in Canada is 9.5%, which is 3.4 million Canadians. This is down from 10.6% in 2016. This may be due to the Canada Child Benefit and the increased Guaranteed Income Supplement top-up, which were implemented in July of 2016 and are part of Canada’s Poverty Reduction Strategy’s targets. These are aligned with the United Nations Sustainable Development Goals to eradicate poverty.

How Are Poverty and Mental Health Related?

According to the Ontario Psychological Association:

“Both poverty and mental disorders are said to “feed” of one another with the mental ill sinking further into poverty. While the wealthier members of society have access to mental health services, financial barriers reducing their opportunities for access to healthcare and further impacting on educational and employment opportunities.”

However, it’s not a simple relationship. Poverty causing mental illness and mental illness causing poverty is through social, economic and physical environments.

Does Poverty Cause Mental Illness?

According to the Ontario Psychological Association, poverty is, indeed a cause of mental illness although all the ways in which this cause acts is unknown. This is partly because those in poverty are known to experience a greater number of traumatic experiences both in their youth and throughout their lifetime due to the impact of living in poverty. Virtually all population-based studies show that those who are marginalized or are living in poverty are at greater risk of suffering a mental illness. This is particularly true of anxiety disorders and depression.

A McMaster University Study showed that those below the poverty line had the highest rate of chronic disorders with a 58% higher rate of depression than the Canadian average. Poverty is also considered a risk factor for suicide.

While the above talks about poverty-caused mental illness in adults, poverty can cause mental illness in children too. It’s worth noting that children in poverty are at a greater risk of depression, anxiety and suicidal ideation.

Does Mental Illness Cause Poverty?

According to the Ontario Psychological Association, mental illness is, indeed, a cause of poverty. Those with serious mental illnesses such as bipolar disorder and schizophrenia are more likely to be unemployed – in fact, up to 90% of Canadians with serious mental illness are unemployed. The mentally ill are also found to be least likely to enjoy decent housing and stable personal lives. This is often due to untreated or poorly treated mental illnesses. Those with bipolar disorder or schizophrenia, may need an antipsychotic like Rexulti (brexpiprazole) or Latuda (lurasidone), for example, and if they can’t get them, they may become psychotic and that can cause anything from job loss, to hospitalization to even engaging with the law.

It’s very clear that those with a mental illness who are also in poverty (or of low-income) could be helped tremendously by proper health insurance. While this isn’t an issue in Canada, thanks to a public healthcare system, it’s a huge issue in the United States. For example, those without health insurance in the United States worry about paying healthcare bills at an alarming rate:

Stressors are known to make mental illness worse and certainly the above type of worry would be considered a stressor.

And while the number of those in poverty with health insurance has increased dramatically since the Affordable Care Act, as of 2017, it is still the case that 10.2% of the nonelderly population does not have health insurance. The state prevalence of adults without insurance with a mental illness varies from 2.2% in Massachusetts to 23% in Texas. This has a major impact on access to healthcare.

Of those without insurance in the United States:

• 24% postponed seeking care due to cost

• 20% went without needed care due to cost

• 19% postponed or did not get prescriptions needed due to cost

Certainly, those with serious mental illness can’t afford to postpone or not get care but if they don’t have insurance, that’s exactly what happens for so many. In fact, even a simple a href="https://www.canadianpharmacyking.com/Products.aspx?id=6" target="_blank">antidepressant like a href="https://www.canadianpharmacyking.com/Drug/Wellbutrin+XL" target="_blank">Wellbutrin XL (bupropion) might be out of reach for so many.

Indeed, 56.4% of adults with a mental illness don’t receive treatment – that is over 24 million adults. This number ranges from a low of 41.5% in Maine to a high of 67.5% in Hawaii. The number one reason adults aren’t receiving treatment in the United States is no insurance or limited coverage of services.

And an untreated mental illness leads to unemployment, housing loss and other harmful things that increase the rates of poverty.

What Can We Do to Help People in Poverty with Mental Illness?

Improving the lives of people with mental illness in poverty can be done in many ways and social, economic and physical environments all should be addressed. Evidence-based methods outlined by principles and actions laid out by the World Health Organization (WHO) are some of these ways. These are constant with the WHO’s Convention on the Rights of People with Disabilities.

According to the WHO, those in poverty with a mental illness could be helped through:

• Including mental health services before and after an emergency

• Creating income-generating opportunities and employment for those with mental illness

The above are designed to both better mental illness and create opportunities to rise from poverty.

The Mental Health Foundation of the United Kingdom also suggests the following ways to improve the lives of those in poverty with mental illness:

o Creating positive policies that recruit, retain and promote those with mental illness

• Training government workers who engage with those with mental illness

• Training of all police officers and those who work in law about mental illness and poverty; creating pathways outside of the legal system for those with mental illness wherever possible

Conclusion – Poverty and Mental Illness Doesn’t Have to Continue

In short, while poverty may cause or worsen mental illness and mental illness may cause poverty, it doesn’t always have to be this way. The recommendations above outline many ways governments and organizations can take steps to reduce both problems. After all, if there is a bi-directional relationship between poverty and mental illness, then addressing each issue should also reduce the other.

Center for Poverty Research, “What Is the Current Poverty Rate in the United States.” University of California, Davis, Oct. 15, 2018.