Home | Blog | A Simple Guide to Dostinex (Cabergoline) for Hyperprolactinemia

A Simple Guide to Dostinex (Cabergoline) for Hyperprolactinemia 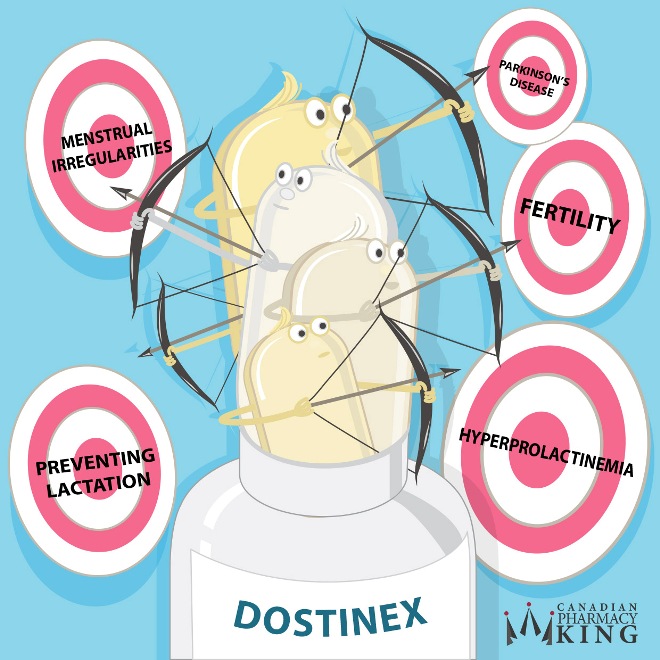 Your body is a delicate machine and any hormone imbalance can cause a series of unwanted side effects or conditions to occur. The hormone prolactin is needed to regulate sex hormones, menstruation, ovulation, and breastfeeding in women. However, men also produce the hormone in smaller dosages, despite having no known normal function behind it. Prolactin is produced in the pituitary gland and when levels rise to high in the body (known as hyperprolactinemia), it has been linked to a handful of different conditions and diseases. Dostinex is a popular medication used to treat hyperprolactinemia, as well as the other conditions associated to it.

What is Dostinex (Cabergoline)?

Dostinex is an oral tablet medicine in a class of drugs known at dopamine receptor agonists/prolactin inhibitor and its main purpose is to treat someone who produces too much of the hormone prolactin. It can also be found going by its generic name, cabergoline. Interestingly enough, this medication has a number of different ailments it treats. From menstrual issues, to fertility problems, and even benefiting bodybuilding, Dostinex can make a difference. This is because of how dopamine and prolactin operate in the body.

The way it works is by triggering the pituitary gland to stop making and releasing prolactin by increasing the levels of dopamine in the brain. Typically, the medication will be used until prolactin levels have been normal for 6 months. Then, treatment will be stopped to see if the hormone levels continue to stay consistent. If they rise again, Dostinex may be continued.

How Many Conditions is Dostinex Used For?

Dostinex is prescribed for a number of different conditions, thanks to its unique ability to treat the prolactin hormone imbalance. Here are some of the most prevalent medical ailments treated with Dostinex or its generic equivalent, Cabergoline.

– The primary condition Dostinex is used to treat is hyperprolactinemia, or high levels of prolactin in the body. This condition can affect both men and women and it translates into a number of other diseases or conditions, as you will soon see. So, while it may be prescribed to treat something like fertility, Parkinson’s or Cushing’s, those are actually symptoms of this root cause.

Hyperprolactinemia is caused by a number of conditions, but the most common include the following:

– High levels of prolactin (hyperprolactinemia) can cause fertility issues for both men and women. Dostinex has an extremely high success rate of 70% when it comes to helping women ovulate. Because of this, the majority of women who take this medication can expect to conceive. It also has far fewer side effects over other dopamine agonists, such as Parlodel. Cabergoline has also been found to help prevent ovarian hyperstimulation syndrome (OHSS) in women undergoing IVF treatment.

– Excessive prolactin is known to cause menstrual irregularities in women. Often, this can even be caused by PCOS or hyperthyroidism. In fact, 30% of PCOS patients show at least a mild, transient hyperprolactinemia.

– Prolactin is a hormone that is needed for breastmilk production in nursing mothers. However, there are times when it may be necessary to dry up breast milk, say, after a stillbirth, adoption, or abortion, or if you have abnormal milk production for any reason. Taking Dostinex will help dry up breastmilk quickly, but it’s not to be taken lightly if you think you might change your mind. The half-life is 63-69 hours, so going back is extremely cumbersome.

– In patients with Parkinson’s, dopamine levels are lower than they should be. Because Dostinex is a dopamine receptor agonist, it increases dopamine in the brain. When there’s an underproduction of dopamine, as there is with Parkinson’s patients, weakness, shakiness, and other nervous system issued kick in, making it difficult to control their bodies.

– Because Cushing’s disease is commonly caused by a pituitary tumor, Dostinex has been shown to be effective in the management of the tumor, as well as a bridge therapy while waiting for surgery to remove it. It can also be used for those unwilling to opt for surgery or those who have contraindications to it.

– Interestingly, Dostinex has been used by bodybuilders looking to negate the negative effects prolactin can have on muscle development when using anabolic steroids. By using Dostinex to lower prolactin, the body is able to increase its testosterone production, thus increasing muscle mass. It can be added to their ordinary supplement regimen without affecting the benefits, but it would still require a doctor’s prescription.

Side Effects of Dostinex

Every medication, even the safest ones, can have a series of side effects. Dostinex is no exemption. Should you notice any unwanted or worsening side effects while taking this medication, you should always bring it up to your doctor right away. The most typical side effects when using Dostinex/Cabergoline include:

Should you notice any severe allergic reactions, such as swelling of the throat, lips, tongue, etc. or any other unwanted side effects not listed above, seek immediate medical attention. However, Cabergoline has been found to be a far safer alternative when it comes to comparing dopamine agonists and most side effects are very mild.

A: Both high and low levels of prolactin can affect libido and can cause some variations of erectile dysfunction (ED). If libido and/or ED are caused by hyperprolactinemia, it is conceivable that your doctor may prescribe Dostinex for treatment. However, they will likely need to verify there isn’t another underlying issue going on—for example heart or blood pressure issues, before moving ahead with treatment by Dostinex.

Q: Can Dostinex cause depression?

A: While generally well-tolerated, these agents can cause psychiatric adverse side effects, including depression, somnolence, anorexia, anxiety, insomnia, impaired concentration, nervousness, hallucinations, nightmares, psychosis, and mania. ... Moreover, there has been no known published case of mania induced by cabergoline. Patients with depressive disorders should be monitored closely. Overall, depression has been found in 3% of patients, it’s by no means the most common side effect. Typically, they are very mild, and include headache, heartburn, tiredness, constipation, nausea, etc. If you notice signs of depression while on this medication, it’s best to reach out to your doctor for advice.

Q: How do you take Dostinex?

A: The dosage of Dostinex will depend on the condition it is treating. For preventing the onset of lactation, the dose of 1mg on the first day after birth is typical. For prolactin disorders, a dose of 0.5mg per week (given in 1 or 2 doses, with pills cut in half) is standard. When it is clear how the patient is responding, the dose can be increased by 0.5mg per week until a maximum of 2mg per week is reached. Doses should not be increased more than every 4 weeks. Dostinex can be taken both orally or vaginally. Talk to your doctor about which dose is right for you.

Where to Buy Dostinex (Cabergoline) Online at Affordable Prices?

Canadian Pharmacy King is an accredited and fully licensed Canadian dispensing pharmacy for Americans to purchase drugs online. We currently offer brand name Dostinex from Pfizer in Turkey (1 strength at 0.5 mg) and the generic Cabergoline for sale comes from India (also known as Cabgolin by Sun Pharma). It comes in two strengths: 0.25 mg and 0.5 mg. We also have another generic version from Canada, known as Apo-Cabergoline by Apotex. It is only available in the 0.5 mg dosage. Our lowest price for the generic equivalent 0.25 mg starts at $2.71, and generic 0.5 mg starts $2.88 per tablet.

Be sure to check with your doctor to make sure Dostinex is right for you. Regardless of whether or not you wish to get Dostinex or Cabergoline, it will require your doctor’s prescription.

If you, or someone you know, has been diagnosed with hyperprolactinemia, there is a good chance you will be prescribed Dostinex or the generic equivalent, Cabergoline. If you have any of the conditions associated with high prolactin levels, such as Cushing’s or Parkinson’s, this medication may also serve you well. Remember, Canadian Pharmacy King has both the brand name and generic versions available to buy safely in a number of different options. So, talk to your doctor about which dosage is right for you.