Home | Blog | Can Trump Still Repeal and Replace Obamacare in 2018?

<< Google Search: Why My Cats Sleep So Much? 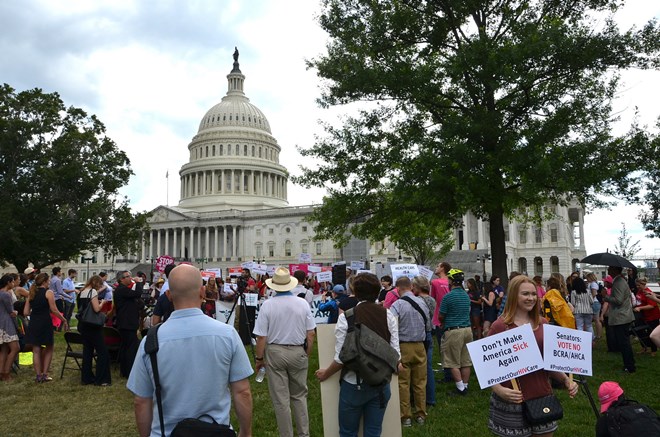 Despite the efforts to repeal and replace the ACA, it’s still going strong. In fact, even with all the confusion, commotion, and deliberate attempts to undermine the 2018 ACA enrollment, approximately 8.8 million people signed up for coverage on the exchange. This was considered by some to be a monumental feat, since the decline was fairly minimal. Especially when you consider it had a 90% cut in advertising and far shorter enrollment period put in place by the Trump administration.

While the ACA continues to draw participants and fierce support, Trump continues to tell everyone Obamacare is “dead,” “finished,” “gone” – and essentially, he plans to “let Obamacare fail” – mostly by strangling the life out of its budget. His recent tax cuts and executive orders are just the tip of the iceberg on ways he could undermine our healthcare system and continue to destabilize it in the years to come.

In the meantime, Trump claims once Obamacare is dead in the water, he’ll come up with something better. Though if his plan for something better looks anything like the failed attempts made by Congressional Republicans last year, we can bet healthcare will continue to be a hot button issue for most Americans.

There’s lot of uncertainty as we go forward into 2018. However, both Senate Majority Leader Mitch McConnell and Speaker of the House Paul Ryan have stressed their priorities for 2018 have shifted from the ACA to the budget and reducing access to welfare and what they call, “entitlement programs” – such as food stamps (EBT) or housing assistance.

With the midterm elections coming up fast, and a push for more affordable healthcare still at central stage—it’s entirely possible for lawmakers on the democratic side to push an expansion for Medicaid—or even veer toward single-payer universal coverage. Especially in light of the GOP’s new focus on targeting lower income families in other ways.

There is a growing gap on the exchange between those in lower-income and higher-income brackets. Most of the lower-income customers currently qualify for subsidies that rise with the premiums—so they don’t feel the pain of the rate increases as much. But that could change, depending on how Republicans target aspects of the ACA. There’s also a middle bracket of customers who make too much to qualify for those subsidies—currently cutting off at 400% the federal poverty level—and they might be priced out of the exchange when they’re not able to find a plan they can afford.

While the two attempts at repealing Obamacare failed to pass, insurance companies still felt the impact of these tumultuous times. This has caused a ripple effect through all of the healthcare industries.

Last year, due to all the confusion over the GOP repeal efforts, many healthcare providers began pulling out of some ACA markets, while others began raising their rates. Some of them even approved massive rate increases—ranging from 15% on up to a whopping 47%.

Exchange carriers are down for 2018—leaving some counties all across the U.S. with only one carrier to choose from on the exchange. If the Trump Administration continues to undermine the ACA and cast uncertainty, Americans are sure to see these trends continue into 2019—potentially even leaving some states without any exchange plan availability at all.

With Trump’s new tax bill eliminating the individual mandate, we can assume to feel its effects in higher costs by providers. As a pillar of the ACA, the individual mandate was a way to keep prices affordable by requiring everyone to have health insurance—or face a penalty. It was put in place to protect those with preexisting conditions by forcing the younger, healthier Americans to pay in and level out overall costs. Without this mandate in place, 4 million people are estimated to go without insurance in 2019 alone—which will continue to rise as the years go on.

With the midterm elections drawing near, Congressional Republicans are far more skittish about taking on healthcare again. This may mean a bit of a reprieve for healthcare providers looking for a bit more stability in the market—and a little less fear for Americans as they look toward next year.

One good thing, perhaps, is Trump has set his sights on high drug prices in America. At his State of the Union address in January, he promised to “make fixing the injustice of high drug pries one of our top priorities.” While it’s uncertain what this will look like, the talk resulted in plummeting stock prices of Eli Lilly, Merck, and Johnson & Johnson.

Impact of Health Insurance on America

Though Americans pay a ton more for insurance, it doesn’t mean we’re healthier. As it turns out, we don’t even crack the top 10 healthiest countries. According to a recent study by the United Nations General Assembly found the United States was ranked 28th out of 188 countries.

Now that Trump and Congress have tried to undermine the current way our healthcare system works, many Americans are stressed to the hilt over health insurance They’re worried about not having coverage, not being able to afford their coverage—or having insanely high deductibles, and lack of coverage, even when they’re paying for it.

By 2020, it’s estimated that the U.S. will spend upward of 20% of its total gross domestic product on healthcare if something isn’t done to correct the trend. Which is why it’s no surprise that 66% of all Americans say health insurance is a big issue in their home. It’s a stressor, for sure—for not only themselves, and for entire families in general. Interestingly enough, the stresses caused by the cost of health insurance impacts all income levels.

According to a recent study by the American Psychological Association, households with an annual income over $50K are actually slightly more concerned about the rising costs. This may be contributed to the income gap regarding the subsidies that lower income brackets are able to access. Not surprisingly, the same study showed those who are uninsured do have a higher level of stress overall. But what can you do when you’re priced out of being able to afford it? This is especially true when you’re still healthy—and no longer have an incentive to stay in, as with the individual mandate.

After the intense ups and downs of 2017 on the United States healthcare system, it’s hard to say what 2018 will truly look like. One thing’s for sure—it’s not likely to get any more affordable this year or any time real soon. In the meantime, more Americans will have to suffer with higher premiums and deductibles—not to mention drug prices. The political climate surrounding this issue hasn’t settled, though—and it’s likely to become the perfect storm as we turn toward the midterm Congressional elections coming up. It’s very likely if Democratic challengers offer a reasonable fiscal solution to our stressful financial healthcare woes—Americans are going to flip the script come November.

Posted in In the News, Light Thoughts, Whats Trending