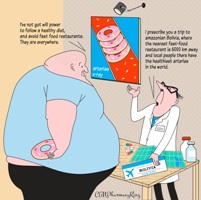 People living in Bolivian Amazon have the healthiest arteries in the world. 90% of the Tsimane people had clear arteries, which means they are not at risk of having heart disease. Even two thirds of people over 75 are have the lowest prevalence of coronary atherosclerosis of any population yet studied.

Their secret is in their diet.

Why You Should Tip Pole Dancers Better

When most people think of pole dancing, they think of strippers. That's not quite an accurate word association anymore. In fact, most pole dancers don't even take off their clothing. And, stripping certainly couldn't be an Olympic sport, but pole dancing is actually in the running.

Doctors Turning Down by 10-A-Day 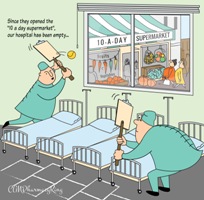 5-a-day is not enough to reduce our chances of dying from a heart attack or cancer. According to a new research, we need 10-a-day, which is equivalent to 800g of fruit and vegetables. For example, 800g a day may include 2 kiwi fruit, 1 apple, 1 pear, 8 cauliflowers florets, 1 glass of orange juice, 3 tablespoons of peas, 2 broccoli spears, 1 tomato and 1 banana.