Home | Blog | Exercise Can Help the Mental Health of Kids 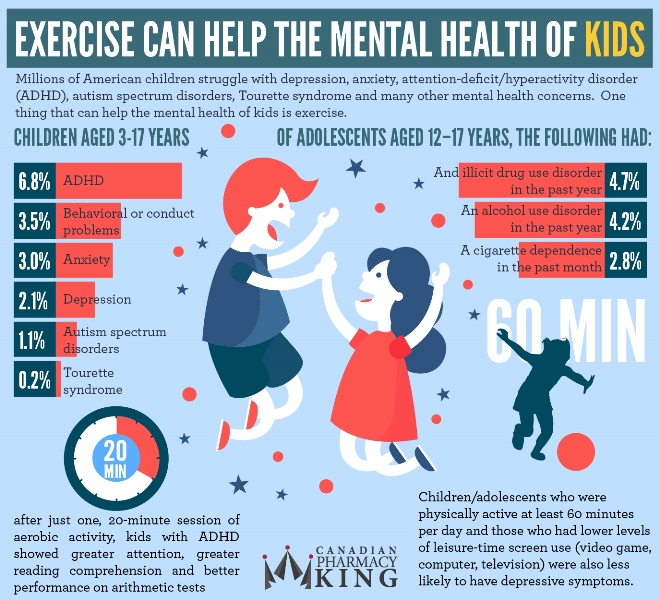 SEE ALSO: Other posts on Parenting Board

How Big is the Problem of Mental Health Challenges in Children?

According to the Centers of Disease Control and Prevention (CDC) from data collected between 2005 and 2011 shows the following.

Of children aged 3-17 years, the following currently had:

Of adolescents aged 12–17 years, the following had:

And, tragically, suicide is the second leading cause of death among adolescents aged 12-17 years old. Suicide is known to be as a result of mental disorders and other factors.

Exercise and the Mental Health of Kids

There are studies that link mental health to exercise in kids.

In a nine-month after school exercise program, brain function in children aged 7-9 was shown to be improved via electroencephalogram (EEG); and those children who participated in more exercise, showed greater improvements.

This was a small but promising study.

Exercise and Depression in Children

The first thing investigated was the correlation between exercise in children and levels of depression. A study of 8256 children and adolescents (with an average age of 11.5) bore this association out. In this self-report study, in which 33% of these youths had medium-high depression symptoms, it was found that depressive symptoms were lower in those who:

• Played on sports teams both at school and outside of school

Children/adolescents who were physically active at least 60 minutes per day and those who had lower levels of leisure-time screen use (video game, computer, television) were also less likely to have depressive symptoms.

Other Mental Health Benefits of Exercise in Children

In a 2013 report, the following two recommendations were made to build a better school environment for youth with mental health and addiction issues:

1. Improve communication and respect between youth and those in leadership roles in order for youth to effectively step into their own and be empowered.

2. Provide youth with increased support and compassion from peers to reduce feelings of isolation.

It’s not hard to see how increased exercise – particularly in the area of sports – can help address these recommendations and, thus, improve the mental health of children.

The Final Word on Mental Health and Exercise for Kids

Natasha Tracey is a professional writer and author for Bipolar Burble. She currently worked as a freelancer for Kingsblog.