<< The Surprising Thing Linked to Hypertension

Beware the Dangers of Vaping 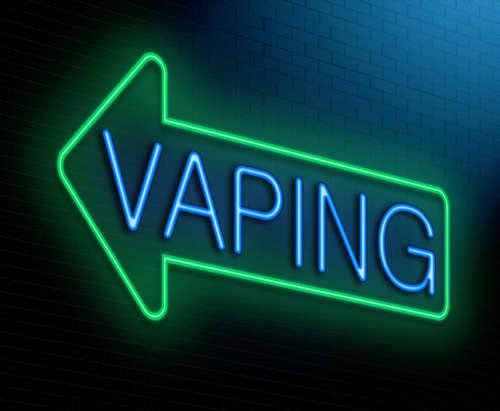 For many struggling with the desire to quit smoking, e-cigs (electronic cigarettes) offer a convenient, no-smoke alternative. However, vaping, as it’s called, has been inciting many poison control calls as the trend grows. Part of this has to do with the unfamiliarity of the nicotine potency e-cigarettes can relay in relation to a traditional cigarette. For others, it can be due to allergic reactions to the various chemicals used in the nicotine mixtures. Or it can be careless thought on the part of the manufacturers, who are working on ways to make their products more child-proof.

For those of you unfamiliar with vaping and e-cigarettes (as I was until recently), they’re basically an electronic vaporizer (thus the term vaping) shaped like a cigarette, which takes a nicotine mixture and heats it up. The user than inhales the vapor, just as they would the smoke from a cigarette.

As it currently stands, vaping is hyped as a better alternative to smoking. Vaping cafes have even popped up in my tiny little Minnesota town, which is how I know it’s gaining traction. However, after a close-call left my mother extremely sick, I knew it was time to check out the risks associated with this new nicotine alternative.

Nicotine is a drug and a poison when consumed at a high enough rate. This doesn’t matter if it’s smoked in the form of typical cigarettes, or inhaled through a vapor. Consume too much and you run the risk of overdose. Suspected liquid nicotine overdose calls are up from just 10 calls in 2010 to well into the thousands just a few short years later.

In 2015, there were approximately 2,600 reported calls of liquid nicotine overdosing in the United States due to vaping. There were 3073 reported “exposure" calls total, though. Which obviously means not all of the calls resulted in overdosing. What’s scary though, 70% of those calls involved children under the age of 6. Let that sink in for a moment.

According to the director of the CDC, Dr. Tom Frieden said in 2014, “E-cigarette liquids, as currently sold, are a threat to small children because they are not required to be childproof, and they come in candy and fruit flavors that are appealing to children."

Last year’s high number of small child overdosing has prompted the FDA to draft industry guidance for pre-market applications and requiring manufacturers to develop child-resistant packaging. Let’s hope this change makes a huge impact, because a single overdose for a small child can be lethal.

So far, from Jan 1 to June 30th, there have already been 901 “exposure" calls. My mother was one of them. While it would appear the numbers are down so far from last year, 901 is still a higher number than we need. It means there’s not enough education and precaution surrounding e-cigarette usages.

It’s important to note poisoning from liquid nicotine can happen not just by way of the e-cigarette inhalation. Children have been poisoned through ingestion (not inhalation) and absorption directly through the skin or eyes. So if you vape, don’t leave your mixture lying about where kids can have access to it.

If you suspect a child or someone you love has overdosed on liquid nicotine, it’s important to pay attention to the symptoms and act quickly.

Nicotine overdose symptoms can include:

In addition to the issues of nicotine overdosing, vaping poses its own set of unique health risks. All of this comes, despite their initial claims of being safer than smoking. As it turns out, warding of cancer does not appear to be one of the benefits of vaping. This is in part, due to the many various carcinogenic chemicals still found in e-cigarettes.

Formaldehyde – Last year, five scientists from Portland State University published an article in the New England Journal of Medicine stating their findings of multiple forms of formaldehyde hidden in the vapors. While their finding show the formaldehyde is produced at high voltage and temperature conditions, it’s safe to say this is concerning. That being said, formaldehyde itself isn’t new to smokers, as it’s found in tobacco smoke that’s inhaled, and also secondhand smoke. In the long run, continuous exposure has been shown to cause cancer in lab rates, according to the American Cancer Society.

Propylene Glycol Allergy – Propylene Glycol is an agent found in things like detergents, paints, lubricants, and even antifreeze. It’s even used in household personal care products and some of the food we eat to improve textures and moistness. Many health advisors have warned against their uses, or at least minimizing it. Of course, it’s also found in the e-cig mixtures. While it would take a lot of PG to get sick, you can suffer toxicity and for those with high inclination toward allergies, they can suffer extreme allergic reactions to e-cigarettes.

Quitting – For those looking for an alternative way to quit smoking, there’s bad news for those turning to vaping. As of right now, there is no evidence the use of e-cigs increase rates of smoking cessation. In fact, according to studies, smokers who vaped as a way to quit were less likely to be tobacco-free after seven months, compared to those who didn’t use e-cigs. While it temporarily cut back on the tobacco use, the nicotine consumption didn’t change, or potentially increased.

Addiction – Thanks in part to the different “flavors" on the market, this could be the tobacco industry’s new cash-cow in relation to smoking. Everyone knows the risks of smoking and their usage has gone down over the years. However, e-cigarettes can be just as addicting as regular cigarettes because of the nicotine in their mixtures. There are plenty in the younger generations who might view vaping as the new “safer" way to smoke, without understanding their risks and being enticed by their child-like flavors.

If you think someone, regardless of age, has been exposed to an e-cigarette or liquid nicotine overdose, call the Poison Control Center at 1-800-222-1222 immediately. Children are particularly susceptible to liquid nicotine overdosing and at this time, there is still significant reason to believe the devices are not child-proof enough.

Posted in Tips for Seniors