<< Is Your Job Hurting Your Heart?

Syrian refugees face many challenges, but one that may be underestimated is the presence of posttraumatic stress disorder (PTSD) in some Syrian refugees. Considering the atrocities many Syrian refugees have experienced, PTSD, a serious mental illness, is a major concern. And according to Dr. Morton Beiser, a psychiatric epidemiologist from St. Michael's Hospital in Toronto, research indicates up to 20 to 50 per cent of refugee children suffer from PTSD, while 10 to 15 per cent of adults are affected. And with Canada’s resettlement program taking on at least 25,000 Syrian refugees, it’s clear that the needs for PTSD treatment could be great.

Posttraumatic stress disorder is a mental illness with symptoms that last for at least one month but can persist for years – or even a lifetime – if left untreated. PTSD symptoms occur after a major trauma wherein the person fears for his or her physical safety or the safety of another. Often this trauma is life-threatening. In the case of Syrian refugees, trauma is common. 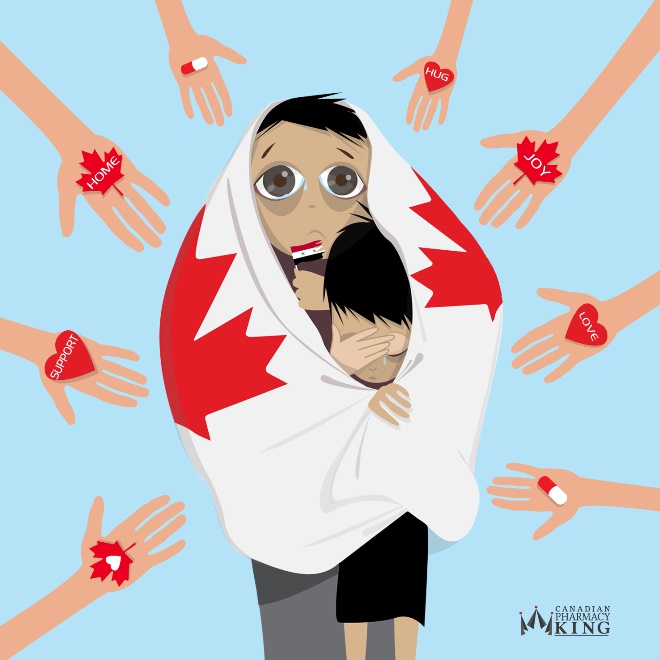 What Kinds of Trauma Have Syrian Refugees Experienced?

According to Albawaba News, examples of trauma that refugees experiences include the following:

A Syrian woman is haunted by the memory of her husband dying from a cardiac arrest as they tried to cross the Turkish border with their four children. An Iraqi woman is traumatised by her encounter with "The Biter," a metal tool used by the so-called Islamic State to clip off the skin of women dressed immodestly. And Hayat, another Syrian refugee, arrives on Lesvos to find that her hands are paralysed – a psychosomatic effect associated with post-traumatic stress disorder (PTSD).

What Is PTSD and How Does It Affect a Person?

PTSD symptoms and its diagnostic criteria are defined by the Diagnostic and Statistical Manual of Mental Disorders, fifth Edition and are classified into eight types. These include:

• Experience of the trauma

• Reexperiencing of the event such as through flashbacks and dreams

• Avoidance of anything that reminds the individual of the trauma

• Negative alterations in mood and thought patters due to the trauma

• Occurrence of symptoms for more than one month

Posttraumatic stress disorder can impact every aspect of a person’s life from one’s personal life, to family life to professional life.

Syrian refugees also have a higher risk of developing substance abuse problems, depression and schizophrenia, additional serious mental illnesses, according to the medical director for the Centre for Addiction and Mental Health.

What Is Canada Doing about Posttraumatic Stress Disorder in Syrian Refugees?

The good news is that the mental health of Syrian refugees has been on the radar of the Canadian government for several months. For example, Syrian refugees will not be housed on military bases unless absolutely necessary, unlike the Kosovo refugees of 1999. This, and timely permanent resettlement into communities are thought to improve the mental health outlook of the refugees.

In fact, even the United Nations is getting educated about PTSD in refugees. This was highlighted when Canadian Clinical Psychologist Rebecca Dempster gave a presentation to the United Nations High Commissioner for Refugees core group on how to deal with trauma victims.

It appears the Canadian government has learned that putting money into mental health services is a sound investment. Dr. Kwame McKenzie says that for every dollar you put into mental health promotion for children, you get $7.00 back and many Syrian refugees are children.

It is known that effective treatments for posttraumatic stress disorder exist and they include both therapy and medication. While professionals admit that more therapists could be needed, it’s also thought that the mental health services that are available are making Canada one of the world leaders in refugee mental health response.

Posted in Bipolar, In the News, Whats Trending