Home | Blog | Exercise Your Way to a Healthy … Brain?

<< Hidden Toxics in Your Home

What is the Big Deal About GMOs? >>

Exercise Your Way to a Healthy … Brain? 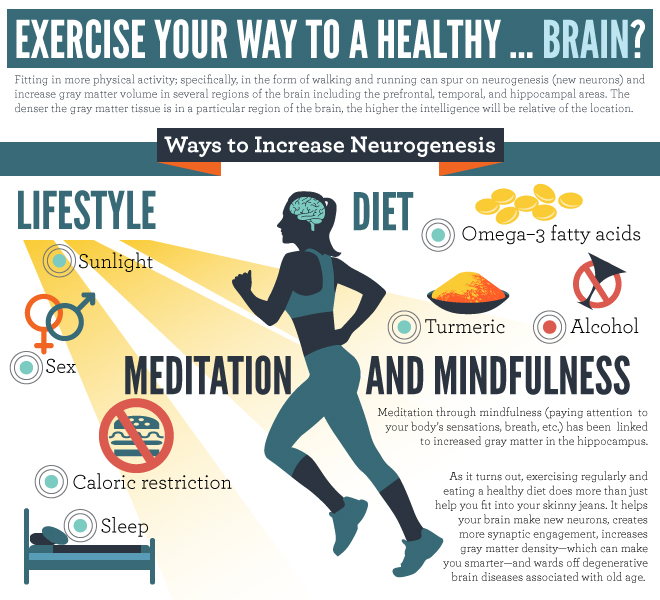 If you could ward off dementia, Alzheimer’s, depression, or any other brain-related issues, would you do it? What if I were to tell you exercise not only keeps your body healthy, but also your mind? Breaking research in neuroscience is proving there’s a connection between daily moderate cardiovascular exercise and your brain’s overall health and regeneration.

As it turns out, fitting in more physical activity; specifically, in the form of walking and running does more than merely make your jeans fit better. Research has been proving it can also spur on neurogenesis (new neurons) and increase gray matter volume in several regions of the brain including the prefrontal, temporal, and hippocampal areas. A key thing to note: the denser the gray matter tissue is in a particular region of the brain, the higher the intelligence will be relative of the location.

When exercising, neurogenesis has been found to occur in two brain regions; the subventricular zone and the hippocampus. Alterations with the latter have been linked to a variety of cognitive pathologies such as anxiety, depression, addiction, and neurodegenerative diseases such as Parkinson’s. A reduction in hippocampus volume has been noted in patients with cognitive disorders, such as depression. When the hippocampus is altered, it affects more than merely the number of brain cells; the Long Term Potentiation (LTP) is also disrupted—which is the brain's method of prioritizing incoming signals. It’s thought to be one of the major cellular mechanisms that underlies learning and memory.

Brain-derived neurotrophic factor (BDNF) is a protein responsible for neuron growth, maturation, and maintenance. The BDNF protein helps regulate synaptic plasticity, which is imperative for learning and memory. According to one study, “There is strong evidence that decreased BDNF is associated with age-related hippocampal dysfunction, memory impairment, and increased risk for depression, whereas increasing BDNF by aerobic exercise appears to ameliorate hippocampal atrophy, improve memory function, and reduce depression."

So what does all this mean? In layman’s terms, moderate exercise will help you maintain your intelligence, memory, and learning capabilities—and in some cases, you could actually get smarter. As we age, a certain percentage of brain mass is lost, resulting in memory loss, dementia, Alzheimer’s, depression, anxiety, and a number of other brain related disorders. According to studies, memory loss can begin as early as your late twenties and it can even show signs of atrophy of the hippocampus—a region of the brain associated for turning short-term memory into long-term memory, emotional behavior, and spatial navigation. Longitudinal studies have reported between 1% and 2% annual hippocampal atrophy (shrinkage) in adults older than 55 years without dementia, and between 3 to 5% for those suffering from Alzheimer Disease (AD). Hippocampal shrinkage has been associated with Major Depressive Disorder in both young and old, according to post-mortem studies of depressed people and suicide victims.

To take things a step further, your weight and gut health can come into play with your cognitive functions. When your body is fighting off inflammation of any kind, you run the risk of potential complications. Lipopolysaccharide (LPS) is liberated by way of leaky gut syndrome and can be directly attributed to brain issues such as Alzheimer’s. When LPS levels are high, one study suggests you’re less likely to be able to grow new brain cells. The good news is, aerobic exercise in elderly mice has been found to offset the damaging effects on the brain from the elevated LPS in the blood stream; thus making it less likely to compromise their neurogenesis capabilities.

According to the Mayo Clinic in a 2011 proceeding, it was said, “Physical exercise should be considered as a prescription for lowering cognitive risks and slowing cognitive decline across the age spectrum."

Other Ways to Increase Neurogenesis

Exercise also doesn’t have to be the only way a person supports brain cell regeneration. There are a number of other ways you can positively impact your brain’s ability for neurogenesis. Here are some of the most notable.

Most of us are already aware of the fact that what we eat is important to our overall health in some way or another. To increase your brain’s neurogenesis capabilities, it stands to reason what you consume plays a role. Here are a few key dietary consumptions that make the biggest difference.

Our brains are composed of 60% fat, so this means consuming the right fats is essential for brain health. Specifically, docosahexaenic acid (DHA). Much of our bodies and, of course our brains use this fatty acid as a major structural component.

Curcumin, the main active compound in turmeric has been found to increase BDNF levels in the brain, along with a host of other beneficial aspects ranging from antidepressant capabilities and possibly even cancer prevention.

When You Shouldn’t Consume Turmeric

The opposite of being beneficial to optimum brain health; you’ll find alcohol and many psychotropic drugs have a negative impact on your brain’s neurogenesis. Chronic alcohol usage has been linked to being one of the most widespread causes behind impaired hippocampal neurogenesis.

Unsurprisingly, the way you live your life has an impact on your brain and its day-to-day function. More importantly, though, it can also make a difference in your ability to support neurogenesis. Here are a few of the ways your lifestyle will impact your brain.

Sleep is when your brain detoxes itself and gets rid of the stuff it doesn’t need. It stands to reason, sleep deprivation is detrimental for the overall brain health and functionality. By getting enough sleep, you keep your brain’s chemistry functioning at optimal levels, with its ability to grow brain matter and new cells operating at full capacity.

Caloric restriction adds a certain amount of stress to the brain and body and has been linked to increased BDNF and improved memory function as it responds. More importantly, the result is the brain increasing neurogenesis. So that diet you’ve been thinking about going on may do more than just flush out fat.

A brief exposure of around ten minutes on your face can impact your brain positively. Not only does it increase vitamin D, but it also increases serotonin levels and Glial cell-derived neurotrophic factor (GDNF) expression in the brain. GDNF is a small protein that promotes the survival of many types of neurons.

Much in the same way exercise is good for neurogenesis, you’ll be happy to know a healthy sex life can also spur on new brain cells. In addition, it spurs on happy neurotransmitters and gets your endorphins flowing—reducing stress hormones. So go on, get as much in as you can.

Interestingly enough, meditation through mindfulness (paying attention to your body’s sensations, breath, etc.) has been linked to increased gray matter in the hippocampus. Nighttime meditation can increase melatonin levels, which has a number of beneficial effects—including being supportive of neurogenesis.

As it turns out, exercising regularly and eating a healthy diet does more than just help you fit into your skinny jeans. It helps your brain make new neurons, creates more synaptic engagement, increases gray matter density—which can make you smarter—and wards off degenerative brain diseases associated with old age. Maintaining cognitive function well into the later senior years of life is important to many of us, and this information brings us one step closer to ensuring brain health in the years to come.