<< Health and Safety Tips for Santa

The New Year Can be a Clean Slate for the Mentally Ill, Too >>

With the birth of their daughter Max, new parents Mark Zuckerberg and Pricilla Chan are doing what most parents in the United States only dream of; they’re taking a substantial amount of time off to be home with their newborn. While his wife hasn’t publically announced how long she’ll be away from her job as a Pediatrician, Mark Zuckerberg announced he’s taking a whopping 2-months to bond with his daughter. To some of you in Canada, this might not be all that unusual, seeing as you get a fair amount of paid time off to be new parents. Here in the United States, we’re not so lucky. 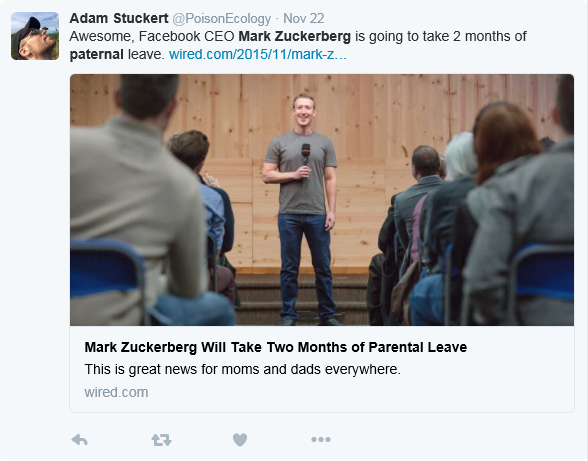 From the start, Facebook is unique in that they allow 4 months of paid maternity or paternity leave; making it one of the 11.4% of workplaces offering paid leave to its employees. As you may have guessed, not only is paid time off for any occasion a truly limited commodity for most Americans, but paid maternity leave is virtually unheard of. Due to lack of legislation supporting families, you can imagine then, that paid paternity leave is far rarer yet. In fact, right now only 13% of Americans have paid time off for Family Leave. For those covered under the Family and Medical Leave Act, new parents only receive 12 weeks of unpaid time off if the company they work for has more than 50 employees. A 2012 National Study of Employers stated 42% of mothers, and 86% of fathers received no income at all during their FMLA parental leave. Because of this scarcity in financial support, new parents often take the bare minimum amount of time off after the birth of a child, simply out of necessity.

Keep in mind, this is despite the overwhelming evidence that infants who are home with their parents for the first 40 weeks of their life develop better bonds, are emotionally more stable, have lower death rates (as much as 10%), and even result in higher male IQs and height. More than that, having more time with your newborn lowers the risk of depression for new moms and dads alike, even decades afterward. There’s even an economic benefit for women, especially. They tend to stay with the same employer, which helps them increase their wages faster. As well as limited replacement costs for companies when they don’t have to hire and train a new person for the job.

Three states have added measures to ensure new parents are able to take paid time off beyond what the FMLA offers – California, New Jersey, and Rhode Island. California’s has been in place the longest, since 2002 (though benefits didn’t kick in until 2004), so perhaps this is why it’s easy for the CEO of Facebook to not blink and eye at the generous offering they provide. Before this state leave law was in place, only 1/3 of dads took more than a week for the birth of a child. Now, eleven years later, more than 2/3 are participating in the early stages of their child’s life.

The interesting thing is, the majority of Americans support paid family leave and other economic support for families. According to a 2012 poll, 86% of voters support new laws to ensure economic security for families. With the economy as it is now, I’d be surprised if that number hasn’t risen.

The impressive, and even encouraging sign of changing times in the United States comes from this small step into the spotlight by the otherwise quiet and introverted CEO of Facebook. It’s my opinion Mark Zuckerberg took this step for two reasons. First, and likely most importantly, because he honestly wants to give his daughter the best start possible by bonding with her early. Second, he wants to set an example for the country. He knows how influential his decisions will be and how many people are watching.

When you look in to the causes Zuckerberg and Chan promote, and the way they handle their personal lives, it’s easy to see why such a decision is important to them. Mark has written openly about how having Max has got him thinking about the world he wants to leave her. As a parent and step-parent of six beautiful kids, and a daughter to aging parents, I feel it’s important we start to make decisive actions to support our citizens here in the United States. Not only for myself, but for my children when they one day fill my shoes. And their children, and theirs, and so on. We live in a day and age where there’s no reason we can’t support our citizens to feel safe, secure, and supported. I hope one day in the near future, the challenges my parents and grandparents faced, let alone those I’ve endured myself in terms of family support, financial support during trying and exciting times, and basic time off becomes a distant memory. Wouldn’t it be lovely if one day, what Mark Zuckerberg has started becomes not only the norm, but expected, supported, and encouraged? I think so.