<< The Worst Part of Eating Junk Food Isn't Getting Fat

A Silent Killer in Your Belly >>

Coffee Enema: A Great Therapy for the Holidays & Winter Season

**Please remember to speak with your primary care physician before following any of these suggestions. This article is for informational purposes and should not be substituted for medical advice.** 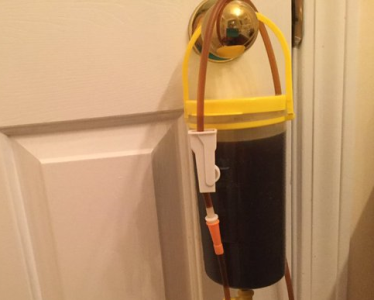 Having good health is a top priority for many people, especially as we come upon the holiday season and look upon the New Year. Sometimes, being healthy means doing a bit of digging to figure out how best to handle your own health, and even considerations on how to detox your body from all the bad stuff we’re exposed to on a daily basis. Especially after we’ve indulged on too many holiday goodies. Not all healthy options are obvious choices, as I’m sure many of you are aware. We’re often bombarded by messages telling us something is healthy, when in fact, it can be pretty harmful and vice versa.

One of the latest trends in detoxification and health as we head into 2016 isn’t really new at all. In fact, it’s been around, in part, since the time of Ancient Egyptians. However, it was made popular again in the 1900’s, but has since fallen in and out of medical grace. So what is it we’re talking about? Enemas—and to be more specific—coffee enemas.

An enema is basically fluid of some sort injected into the lower bowel by way of the rectum. In this case, the fluid being injected is coffee, with a mixture of other ingredients. There are a number of reasons someone may use a coffee enema, but there uses vary widely. The majority of people utilize enemas in general to help with constipation and other gastrointestinal issues. In the case of coffee enemas, the trend right now has to do with detoxing the body—and in specific, the liver. Who couldn’t use a liver detox after all the long nights hovered over the Christmas cookie tray with a glass of Eggnog? Am I right? However, detoxing your liver isn’t the only benefit people who have used coffee enemas claim to have.

Health Benefits Can Include:

3. Reduce toxicity in the body

5. Better absorption of minerals and vitamins

9. Helps with depression and anxiety

Coffee enemas as a cancer treatment?

Coffee enemas first arrived on the scene between 1917 and 1920, most prominently thanks to a German-born American doctor named Max Gerson. He developed a controversial treatment, known as the Gerson Therapy, which utilizes coffee enemas, along with a special diet, and supplements to treat a variety of disorders. The therapy initially began as a treatment for migraines and tuberculosis, but later was used as a therapy by Gerson to treat cancer. Until they were claimed to be useful in this way, coffee enemas were considered to be fairly harmless and even were supported in the Merck Manual until the 1970’s. Unfortunately, Gerson never had his therapy peer reviewed. Due to the fact that he relied heavily on anecdotal evidence and the US National Cancer Institute was unable to substantiate Gerson’s claims that the therapy worked for cancer patients, it’s actually illegal for a medical practitioner to treat patients with his therapy as a cancer treatment. However, this hasn’t stopped hundreds of people from traveling to other countries where the treatment is available.

How do I try out a coffee enema for myself?

Coffee enemas may not be for everyone. If you’re not interesting in the methodology behind them, I’d suggest giving them a miss. However, if you’re interested in trying something different to see how it affects your health, go for it. There are a number of extremely detailed, helpful sites, if you’re interested in giving a coffee enema a try that will walk you through the whole process. Here are a few I’d suggest:

You can even listen to this great podcast to get more information about coffee enemas. It’s a full hour long and jam-packed with all sorts of information to get you on your way.

Coffee enemas are touted around the world as a great way increase your energy and release toxins from the body. Perhaps as you’re thinking about your New Year’s Resolutions to be healthier and lose some weight, consider adding coffee enemas to your things to try. In some skeptic circles, the jury is still out on just how effective they really are. Yet, there are countless thousands who have tried coffee enemas and swear by them. Personally, I find that if there really is no major downfall to doing them (there are very few cons, actually – and those consist more for people who suffer coffee/caffeine allergies), why not try them and see for yourself if they have any effect. In all honesty, it’s one of the only true ways to know for sure. Who knows, you may be pleasantly surprised. Besides, who doesn’t want to start off the New Year shaking off the winter blues, cleaning out the gunk from your digestive tract, and maybe even looking hotter and having more energy to boot. I know I could totally live with that.

Carissa Andrews is a passionate author and freelancer from Minnesota with a focus in creative writing.