Home | Blog | The Link Between Diabetes and Mental Illness

This article was written by award-winning writer and speaker, Natasha Tracy. 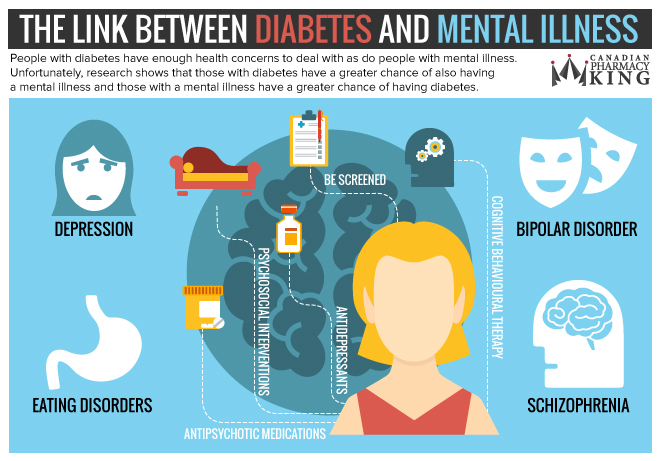 Why Are Diabetes and Mental Illnesses Linked?

It is also know that those with chronic illnesses, like diabetes, have a higher chance of mental illnesses like depression. For example, the prevalence of depression in the diabetic population is approximately 10%, which is double what is seen in the average population.

People with depression have approximately a 60% chance of developing type II diabetes and, unfortunately, for those both with diabetes and depression, prognosis is worse than for either illness alone. Additionally, depression and diabetics amplifies symptom burden by a factor of about four and episodes of depression in individuals with diabetes are likely to last longer and have a higher chance of recurrence compared to those without diabetes.

According to the Canadian Diabetes Association, the following are risk factors for developing depression in those with diabetes:

If you have depression, physical inactivity or obesity increase your risk of diabetes as does psychological stress.

Eating disorders are more common both in individuals with type I and type II diabetes than in the general population. Diabetes type I appears to be a risk factor in developing an eating disorder. Eating disorder risks in this group also include deliberate insulin omission, known as diabulimia.

Another syndrome known as night eating syndrome is also more commonly present in those with type II diabetes with depressive symptoms. According to the Canadian Diabetic Association, night eating syndrome (NES) is characterized by the consumption of more than 25% of daily caloric intake after the evening meal and waking at night to eat, on average, at least 3 times per week. NES can result in weight gain, poor glycemic control and an increased number of diabetic complications

People with schizophrenia and other psychotic disorders appear to have an increased risk of diabetes both before and then, additionally, after treatment with atypical antipsychotics. Their risk before treatment is still being debated, however. The prevalence of metabolic syndrome is approximately twice that of the average population.

Recommendations Regarding the Mental Illnesses and Diabetes Link

The Canadian Diabetes Association recommends the following to protect those both with diabetes and those with mental illnesses:

1. Individuals with diabetes should be regularly screened for subclinical psychological distress and psychiatric disorders (e.g. depressive and anxiety disorders) by interview or with a standardized questionnaire.

2. Psychosocial interventions should be integrated into diabetes care plans, including

4. Antipsychotic medications (especially atypical/second generation) can cause adverse metabolic changes. Regular metabolic monitoring is recommended for patients with and without diabetes who are treated with such medications.

For full information on the link between mental illness and diabetes as well as references for the above, please see Diabetes and Mental Health from the Canadian Diabetes Association.