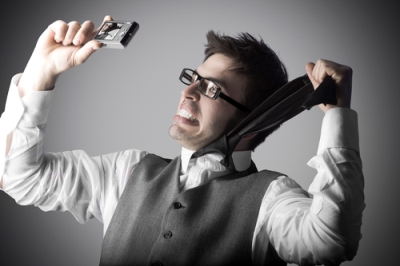 by colourstudio.it, despositphotos.com
In a world so overcome with their hidden desperation to be loved and accepted, it’s no wonder that bubbling to the surface is the need to please via selfies. As it turns out, the one-upmanship has escalated in recent years to the point of people doing the stupidest things for the sake of likes on their social media sites. So many people are enthralled with them, in fact, the word “selfie" was officially accepted by Merriam Webster for entrance into the dictionary last year. This is in and of itself a bit of a crazy feat, when you think of it. Last month Yahoo presented an article stating 2015 marks the first time when taking a photo of yourself has become deadlier than being attacked by a shark. Let that sink in for a moment. I mean, wow.

It seems as though every year there’s a new trend happening in the world of selfies that tries to outrank the previous one. This year, the trend appears to be hashtag related to: #drivingselfie, #drivingselfies, and even #drivingtowork. Taking it up a notch, some adrenaline junkies take that up a notch, taking selfies (or having someone snap one for them) while they open a car door and hang halfway outside the moving vehicle. I kid you not. Let’s get something straight: distracted driving in general can be attributed to 12% of fatal crashes. This is something simple like texting while driving and takes only seconds. Now imagine how long it takes to unbuckle (presumably), leave your seat, open the car door, and hang outside your moving vehicle; then climb back in, close the door, re-buckle, and take the wheel. If this isn’t a recipe for complete disaster, I don’t know what is.

Now, don’t get me wrong, I understand the desire for a good picture. Sometimes, it’s not even tied to the desire for likes or for a rush of adrenaline – you just want to have a picture you’re proud of. However, studies are being conducted to determine whether or not selfies can actually be linked to narcissism or psychopathy. As of right now, findings are indicating there is a link between narcissism and selfies. However, this appears to be more so with men than women – since women are more prone to use social media for connecting and sharing; according to Gwendolyn Seidman, Ph.D in Psychology Today. Additionally, people with Body Dysmorphic Disorder (a mental disorder which holds obsessive preoccupation with a perceived defect in one's appearance, viewed as so severe as to warrant exceptional measures to hide or fix it), can be especially vulnerable as they can lack the self-control to walk away from their fixation. Many will obsessively and compulsively take and retake selfies trying to get one they deem worthy. This disorder has even led to the first documented case of attempted suicide related to “selfie addiction" – a nineteen year old British teen. Luckily for him, he is being treated and did not become the first documented casualty.

Selfies aren’t going anywhere, but here are some common sense ways you can stay safe and have fun with them, too.

1. Stay Behind the Line

If there’s a yellow line, a string, a divider, or some other known way to keep the public from crossing into potentially dangerous territory – adhere to it with your selfie indulgence, would you please? A Polish couple died last year after moving beyond the safety barrier at a cliffside in Cabo da Raca, Portugal to get their selfie. They left behind their two young children who watched the events unfold. I cannot stress this enough, extreme selfies aren’t worth the risk.

For those with extreme selfie adrenaline desires, do everyone a favor and learn to climb safely and securely. If your plan is to take a picture at the top of something like a bridge or a building, go prepared with safety knowledge and having the proper equipment on your side. Additionally, if it’s illegal to climb the place you’ve got your eye on – get proper permission before hand or forget it. A selfie without permission is the perfect evidence to prove you did something illegal and for the authorities to press charges.

3. Vehicles Are For Driving

Upwards of 3,000 deaths are caused each year by distracted driving. Whether you’re texting, talking, or taking a photo, the few seconds it takes is enough to put lives at risk. "Taking a photo of yourself while you're driving a 2,000-pound vehicle down the road at 50 or 60 miles per hour? That is putting your life in danger and putting the lives of those around you in danger," Jackie Gillan, president of Advocates for Highway and Auto Safety, told CNN. Let’s all do each other a favor and stick to focusing on the road instead of anything else when driving.

Being in a new environment, and especially one with lots of people or strange surroundings can make even the most with-it person a bit disoriented. Match all that with a selfie obsession and you could find yourself in some serious trouble because you’ve lost your balance, gotten too close to an animal, or a train conductor’s foot. Just this year, a Japanese tourist died at the Taj Mahal after slipping down the steps taking a selfie at the Royal Gate, according to the BBC.

If at any point, you’re questioning whether or not you should take a selfie – whether it be in a new place, an extreme location, a potentially dangerous situation, or even simply too distracting because of all that’s going on around you – please, for the sake of all who love you, wait.

Whether or not you have the “perfect" selfie, life goes on and no one will think the less of you. If you feel you, or someone you love has Body Dysmorphic Disorder or a selfie addiction, please seek help. Cognitive behavioral therapy can be used to help patients recognize the reasoning for the compulsive behavior and how to manage or moderate it. For the rest of you, have fun and stay safe.

Posted in In the News, Whats Trending