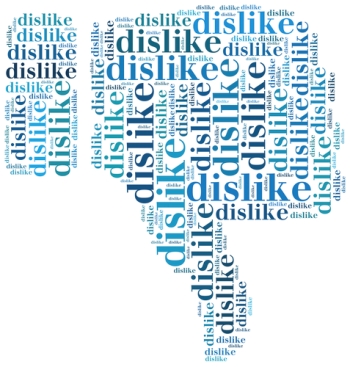 by Mattz90, despositphotos.com
Facebook is finally responding to users’ requests and adding a “dislike" button to Facebook posts. Just like the “like" button, users will soon be able to click a button to “dislike" a post. But the question is, is this new dislike button on Facebook going to harm people’s mental health? Will the dislike button actually make people feel better or worse when using this social media site?

“. . . people have asked about the dislike button for many years. Today is a special day because today is the day I can say we’re working on it and shipping it," Mark Zuckerberg, chief executive at Facebook, said during a question and answer session at Facebook’s headquarters, according to reports from Business Insider and CNBC.

According to Zuckerberg, the dislike button is being added so that users can express empathy for peoples’ posts. For example, if a person on Facebook posts about a death, users would click the dislike button to show they are empathetic to this sad moment in another person’s life.

The thing that we know about Facebook is that because people spend so much time on the social media site, what happens on Facebook can actually harm a person’s mental health.

According to Douglas T. Kenrick Ph.D. and Jessica E. Bodford at Psychology Today, there are seven ways Facebook is bad for your mental health:

2. Facebook can lead you to envy your friends’ successes.

3. Facebook can lead to a false sense of consensus.

4. Facebook can keep you in touch with people you would rather forget.

5. Facebook can make you jealous of your current partner.

But the question is, will the Facebook dislike button make mental health issues for Facebook users better or worse?

While expressing empathy with a person going through a difficult time may be beneficial, certainly, that is not the only thing the dislike button will be used for. Zuckerberg himself has concerns over the dislike button resulting in a rating system where posts with greater likes outweigh someone else’s posts with more dislikes.

Additionally, while people think of Facebook as a place to be surrounded by only those who are supportive and friendly, many people on Facebook are friends with those who may not agree with their viewpoints on things like politics or social issues. Or, a person may even use the dislike button as a way of “getting back" at someone with whom they are angry. This may be particularly apparent for those who choose to post publically and not just to their friends.

For example, what if a person sees a number of dislikes on a post that they consider positive? This will surely make the poster feel bad and possibly even harm his or her mental health over time.

Or, consider the case where a person posts about a political or social issue such as gay rights. If the person sees a host of dislikes on the post, he or she may feel slighted, particularly if the person is gay him or herself and this can certainly harm a person’s mental health as this may add fuel to the fire suggesting that his or her sexuality is not accepted by society or even, indeed, his or her friends.

And, as noted by Kenrick and Bodford, likes versus dislikes may create a false form of consensus. More likes equals “good" or “support" and more dislikes equals “bad" or “unsupported" when really issues are considerably greyer than they are black and white: dislike and like.

Click here for another good PR, Sick Profit: it's a sickness hinging upon by an almost entirely uncontrolled drug market driven primarily by profit.

Natasha Tracey is a professional writer and author for Bipolar Burble. She currently worked as a freelancer for Canadian drug stores.