<< De-stressing With Apps In The 21st Century

What do nuts, spices, raw pet food, and raw tuna used for sushi have in common – that’s right – salmonella. In recent months there has been 62 confirmed cases popping up across 11 states – Minnesota included on just the sushi alone. Eeeep, I like my sushi, too.

Osamu Corporation out of Gardena, CA is responsible for recalling a batch of frozen yellow fin tuna chunk meat (lot #68568) after the product was found to host salmonella by the Minnesota Department of Health. Illnesses resulting from the salmonella cases were reported as early as March 5th and going into July. The product was traced back to a plant in Indonesia, which in turn affected 34 people in California, 11 people in Arizona, six in New Mexico, four in Minnesota, and one each in Michigan, Mississippi, Virginia, Washington, Wisconsin, South, and Illinois. All ages were affected as the youngest was merely one and the oldest was 83.

For those of you who have sworn of sushi over this, it’s important to note that there are more ways to get the salmonella bug. In fact, just in the last month, three new ways have come into the light of this trending topic. 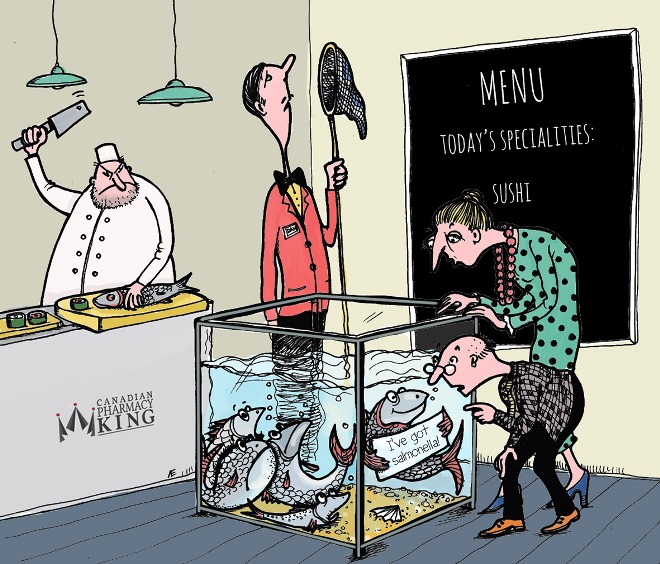 Turns out, animals aren’t even safe. Two companies of raw pet food, Nature’s Variety and Bravo, are also recalling pet food due to salmonella. Dogs and cats are both susceptible to Salmonellosis, particularly those animals with compromised immune systems. In all actuality, however, the real ones to watch out for are young children in the homes of animals who are fed a raw food diet, as they are most susceptible.

Why’s it so bad? Symptoms of Salmonellosis

Salmonellosis is a common form of food poisoning, with over 2,000 strains that can affect some animals and humans alike. According to the National Library of Medicine, symptoms can begin anywhere from 8 to 48 hours after being infected with the bacteria.

Main symptoms in humans include:

The chronic forms of salmonellosis can (and will) exhibit some of those same symptoms, but will likely be more severe. The symptoms include:

• Diarrhea lasting up to three or four weeks, or longer – typically coming and going; seemingly without a reason behind doing so

If you’re unfortunate enough to catch Salmonellosis, the key to feeling better is proper hydration. Some of the treatment tips listed at the National Library of Medicine include the following:

• Rehydrate - drink 8 to 10 glasses of clear fluids every day (In case you’re curious, water is best.)

• Replenish - drink at least 8 ounces of liquid every time you have a loose bowel movement.

• Graze - eat small meals throughout the day instead of three big meals.

• Salt - eat some salty foods, such as pretzels, soup, and sports drinks.

• Potassium - eat some high-potassium foods, such as bananas, potatoes without the skin, and watered-down fruit juices.

If your child has salmonellosis, give them fluids for the first 4 to 6 hours. At first, try 1 ounce (2 tablespoons) of fluid every 30 to 60 minutes.

• Electrolytes – they should also receive electrolyte replacement solutions as recommended by your child's health care provider. You can use over-the-counter drinks such as Pedialyte or Infalyte. (Do not water down these drinks.) You can also try Pedialyte popsicles for older children.

• Other Liquids - watered-down fruit juice or broth may also help.

Medicines to slow diarrhea are usually not given because they may make the infection last longer. If you have severe symptoms, your health care provider may prescribe antibiotics.

With all the contamination of recent days, it’s important to know the warning signs of Salmonellosis, so you can take affirmative action to get better. Please remember that these tips are no substitute for your doctor’s advice. If you’ve been sick for longer than a week, or have had diarrhea more than 8 or 9 times in a day, seek out the help of your doctor. While most cases of Salmonellosis will cure themselves in a matter of days (sometimes weeks), there are a small percentage of people who die each year.

Carissa Andrews is a passionate author and freelancer from Minnesota with a focus in creative writing.