Home | Blog | What Are Negative and Positive Symptoms in Schizophrenia?

<< It’s Good To Be King: The Life & Future Reign of Prince George 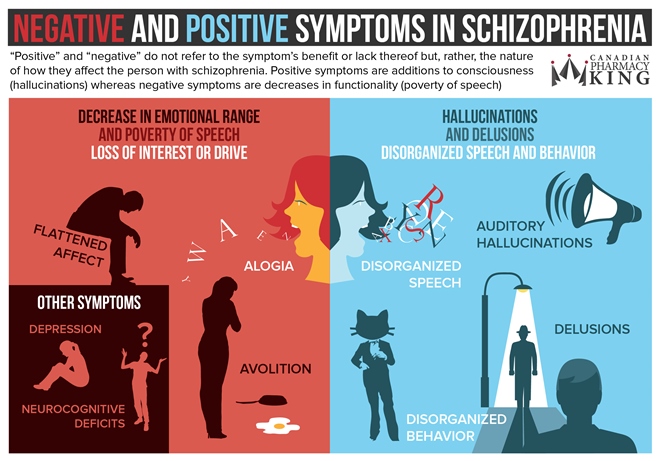 Catatonia, which is a severe impairment in a person’s movement, posture and responsiveness, is also a positive symptom of schizophrenia.

The negative symptoms of schizophrenia include a decrease in emotional range, poverty of speech, and loss of interest or drive. A decrease in emotional range is often known as a flattened affect. This refers to little emotional expression or response. Poverty of speech is associated with alogia, which is impoverished thinking that occurs when a person’s speech is very limited in terms of content and spontaneity. A loss of interest or drive is associated with avolition, wherein a person cannot initiate or participate in any task which is goal-oriented. This often affects a person’s ability to perform daily tasks such as meal preparation or dressing him or herself.

Other Symptoms of Schizophrenia

Mood symptoms in schizophrenia often include symptoms of depression. People with schizophrenia may also appear to be happy or sad in inappropriate situations.

Using Symptoms of Schizophrenia for Diagnosis

It’s worth noting that not all people with schizophrenia suffer from all symptoms and schizophrenia presents differently in different people. That being said, the Diagnostic and Statistical Manual of Mental Disorders, Fifth Edition (DSM-5) includes the following as diagnostic criteria for schizophrenia:

• The person must have experienced at least two of the following:

• At least one of these symptoms must be the presence of delusions, hallucinations, or disorganized speech.

• Continuous signs of schizophrenia must exist for at least six months, with at least one month of active symptoms, for diagnosis.

• Social or occupational impairment must also occur over a significant period of time.

Treating the Symptoms of Schizophrenia

The positive symptoms of schizophrenia are treated with antipsychotic medication. Two commonly used medications are aripiprazole (Abilify) and quetiapine (Seroquel). While the side effects from this type of medication can be challenging, positive symptom control is usually effective.

The goals of psychosocial treatment are to enable the person with schizophrenia to perform daily activities such as managing his or her or own funds and medication, to avoid hospitalization, to have fewer or more stable symptoms, and to be in school or work at least half-time.