Tips and Tricks for Fun Hiking with Little Ones >>

The Dad Bod Sleight of Hand 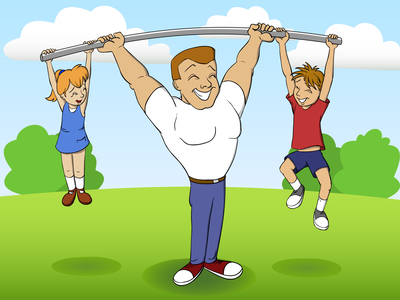 by acidburn, despositphotos.com
There seems to be something amuck with our trends these days. I recently wrote an article about beauty standards for women by teaching our daughters when they’re young. Everywhere I look, it seems like women are berating themselves and trying to find a way to justify their looks or at least reconcile them with society’s views. Meanwhile, enter the “Dad Bod" social media frenzy. In a split second, 500 words written by a college sophomore declaring “girls are all about the dad bod" went completely viral, giving men with a plump appearance a self-esteem boost. For those of you unfamiliar, Mackenzie Pearson claims the “dad bod" to be a look of, ‘I go to the gym occasionally, but I also drink heavily on the weekends and enjoy eating eight slices of pizza at a time.’ Still confused? The Washington Post can help you work out whether or not you have a dad bod by clicking here.

Some feminists claim this trend is unfair because it gives pudgy men a free pass, while the “mom bods" out there are still considered unflattering.

Hold up a moment while I pick my jaw off the table.

Did people not read the same article I did? How can they actually believe it was in praise of this body type? If anything, it’s a narcissistic attempt at women claiming superiority over their male partners. Explain to me how this is a good thing?

If you read it closer, the article is actually a backhanded high-five to those men with beer bellies and the remnant of muscles, as Mackenzie goes on to say, “We want to look skinny and the bigger the guy, the smaller we feel and the better we look next to you in a picture."

If roles were reversed and some man said, “I like plump women because even if I eat a slice of pizza with a beer, I always look hella better standing next to her." The true meaning of Mackenzie’s words rings through when reversed, doesn’t it? Can you imagine the backlash? It would be swift and immediate.

Basically it says women don’t want to compete for attractiveness with the man in their life, thus making the so-called “dad bod" more of a match to eliminate their own insecurity. Give me a break.

If you’re that insecure, it’s time to really take a good hard look at your own issues and stop trying to pawn them out externally.

Men who take care of themselves are hot. Don’t get me wrong; they don’t have to have washboard abs, buns of steel, and arms like guns (or whatever the analogy is there) to be sexy. Sometimes it means eating well, working out when able, and trying to keep everything in good shape to stave off disease. To many women, me included, it says a lot when a man recognizes taking care of himself now will mean more time to spend with his partner later in life. This isn’t vanity; it’s an investment for both himself and the people in his life. Perhaps Mackenzie is too young to see beyond the college dorm, but life is so much more than looks and comparisons. Relationships exceed being two separate people vying for attention or wanting assurances on what body type their partner will have at 45.

People are very quick to judge and stereotype, dolling out ridiculous names for body types (for both men and women). What if instead, we start accepting people as they are, since everyone still needs to be loved and accepted regardless of their structure?

Society makes us feel insecure, but we have the ability to take it back. We don’t need to be beholden to their standards and perpetuate the madness. We can love all the “dad bods", “mom bods", “fit bods", or as I like to call them, people equally.

This is a really inegnlietlt way to answer the question.