The Surprising Side Effects of Grooming >>

Growing up, the music in my house revolved more around Classic Rock than Blues, but even this Minnesotan gal has heard of the great B.B. King. Truthfully, though, until his passing, I knew very little about the man himself. Sometimes life is funny like that. We get so caught up in all the little things in our own lives, the different aspects pulling our attention from the start, that we miss some of life’s amazing people, places, and things in our periphery. B.B. King is one such amazing man. 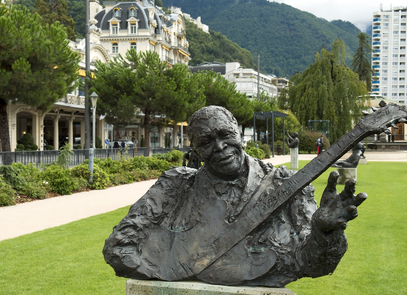 One of the things I found most interesting, is B.B. King truly felt the full rhythm of the blues woven through his early life. As a child, he parents separated, his father left, and his mother died young, presumably from complications of diabetes, although no final death record was ever filed. In an interview of B.B. King, he states that he lived alone from the time of her death when he was nine until about age fourteen – where he lived with his grandmother and aunts. Can you imagine that for a moment? I have a nine-year-old son now and I simply can’t fathom him finding his way alone for the next five years of his life. Particularly after the devastation of losing his younger brother Curce when he was five, and then his father to divorce shortly after.

As a youngster, Riley was a bit of a rebel, it seems and never one for schooling. Though he did really appreciate his teacher Luther H. Henson whose teachings about life truly stuck with him. Though schooling was never his strong suit, he took many of the man’s words to heart as he grew up.

“I try to be as nice as I know how to be. I love people. I'll tell you something I don't tell people often, but I believe all people are good. Sounds funny coming from a Mississippi boy, but it's the truth. I believe all people are good. Just a very few do bad things. And you know what I believe? They couldn't find a man like my teacher Luther H. Henson. I could listen to him and I could hear him, and I believe if those bad people could find someone – because there is someone out there I believe that they will listen to. I truly believe that."

Later on in life, B.B. King would talk about learning new things, and experiencing everything he could. He says that as a child, he was lazy about learning. Instead, he was far more interested in girls. I think his fifteen children mothered by fifteen different women will attest to that. However, as he got older, he understood the value of learning and growing each day.

“The beautiful thing about learning is nobody can take it away from you." He was known to say.

I have to agree. He also professed how even someone as celebrated as he was learns something new about their craft daily. B.B. King was a deeply humble man and it bled into his lyrics and his every day life.

It was the little things. Like the way his guitars were named “Lucille" to remind him of the night he went into a burning dance hall to save his guitar. It was a foolish errand, and he knew it – but once he found out the fire was started due of a fight over a girl named Lucille, the rest, as they say, became history.

B.B. King’s work ethic was unparalleled. Often he’d play a show near-on every night of the year and never miss one, despite his health issues and battling diabetes. He felt you need to respect the people who give their hard-earned money to come and see you perform. This is something he honored until the very end.

For his spectacular career, he holds a record 15 Grammy’s for the blues genre and in 1987, was honored with a Recording Academy Lifetime Achievement Award.

B.B. King found music to be his joy. He used to say that music was his drug of choice. For younger musicians as they start out on their personal musical journey, his advice was simple:

“Get high off your music. Don't use drugs of any kind. Please don't smoke because that will mess up your vocal cords for your singing. Be a person. Just as you want to be loved, love them. Always respect the people that come to hear you play."

RIP, B.B. King. May your music live on and continue to inspire generations.

Posted in The Kings, Whats Trending