Home | Blog | What is Childhood-Onset Schizophrenia?

<< Generic Drugs 101: Getting to Know the Generics

SEE ALSO: What Are Negative and Positive Symptoms in Schizophrenia?

What Signs Appear Before Childhood-Onset Schizophrenia?

Childhood-onset schizophrenia correlates with a number of experiences in childhood. Before the onset of psychosis, many children who develop schizophrenia:

• Have disturbances in behavior and cognition

• Experience delays in speech, language, and acquisition of motor milestones (about 50% of children in this group)

• Develop symptoms of inattention, hyperactivity, aggression, or rage (about 1/3 of children in in this group) 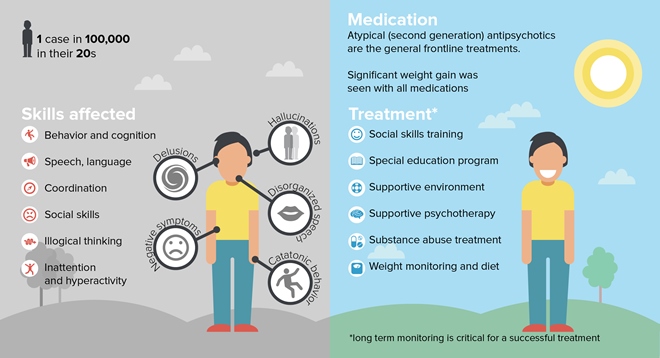 It is because of these initial issues that help may have been sought and other diagnoses may have been levied. These initial diagnosis may be things like attention-deficit/hyperactivity disorder (ADHD), pervasive developmental disorder (PDD), or affective disorders such as depression or bipolar disorder. In one study, the first symptoms of psychosis didn’t appear until 2.5 years after the initial clinical presentation.

There are no differences in diagnostic criteria between childhood-onset and adult-onset schizophrenia and all adult symptoms of schizophrenia have also been documented in children.

2. Hallucinations – perception that aren’t real in any of the five senses

5. Negative symptoms – such as flattened affect, poverty of speech, and loss of interest and drive

Other criteria for the diagnosis is the severe impairment in one or more major life areas (such as personal care, school, etc.) and a persistence of continuous signs for at least six months. Additionally, schizoaffective disorder must be ruled out as must substance use disorders or another medical condition.

While not enough study has been completed, some studies have shown that bizarre behavior and negative symptoms may be more common in the earlier-occurring forms of schizophrenia. Additionally, when compared to adult-onset schizophrenia children:

Cognitive functioning is often impaired at the onset of childhood schizophrenia. Full-scale intelligence quotients (IQs) have been in the 80s with particular deficits in verbal comprehension, language, and short-term memory. Attention and executive function may also be impaired.

Expressions of Psychosis in Children with Schizophrenia

Hallucinations, often auditory, are the most commonly reported symptom of psychosis. A recent study showed that of children with schizophrenia:

While schizophrenia is a serious, lifelong disorder, treatment is available. Treatment of childhood-onset schizophrenia should include psychosocial management as well as medication.

No medications are Food and Drug Administration (FDA) approved for use in children with schizophrenia. However, atypical (second generation) antipsychotics are the general frontline treatments. Occasionally, a benzodiazepine may be added for a severely agitated child.

Unfortunately, atypical antipsychotics have been shown to have serious side effects in adults and children. A recent study examined the cardiometabolic effects of olanzapine (Zyprexa), quetiapine (Seroquel), risperidone (Risperdal), and aripiprazole (Abilify) in a 12-week trial in children and adolescents with mood and psychotic disorders. Findings include:

• Significant weight gain was seen with all medications.

• Weight gain was greatest with quetiapine and olanzapine.

For these reasons, it’s critical to monitor children on antipsychotics closely, particularly initially, and perform cardiometabolic monitoring biannually after the first three months.

In one study in adolescents and young adults, omega-3s were shown to reduce the risk of progression to full-threshold psychosis and may also be useful in treatment.

In addition to medication, children with schizophrenia should be receive additional forms of care such as:

Finally, it’s important to remember that long-term monitoring is critical to successful treatment of childhood-onset schizophrenia.

Natasha Tracy is a bipolar freelance writer for Canadian pharmaceuticals