<< 12 Tantalizing Tips For Your Best Sex Ever

Pain in life is inevitable, but the way we manage it can vary from person to person. Some people are able to grin and bear it, while others might cringe just at the thought. Yet without pain, our body would have no way of protecting us from dangers that could become life threatening without immediate attention. It’s a part of our fight or flight response that guides us to stop doing things which are harmful or hurting us.

So while we may not be able to escape pain, there are some interesting ways to control the pain response without the need for pills, or heavy narcotics.

By preparing yourself before something that may cause pain (like a dental appointment, an injection, or even giving birth, for example), you will reduce your pain response up to 28%. MRI scans revealed the brain registered pain less when the expectation was already set low.

By reducing your inhalations and exhalations to half-speed, you can reduce your body’s response to pain. Not only does it diffuse your body’s fight or flight response, but it can be a good mental distraction when you make it an intention to focus on your breathing. Can anyone say Lamaze?

Here’s one that works not only as a mental distraction, but has another medical basis behind it. Studies have found that by coughing just as you’re about to have a painful experience, like a flu shot, increases your ability to withstand the pain. This is because coughing elevates your blood pressure temporarily, which has already been known to reduce pain perception.

According to a Japanese study, patients who counted backwards while getting an injection said the procedure didn’t hurt at all. In comparison, those patients who didn’t count, found that not only did the injection hurt, but they actually remembered the physical sensation of the pain.

5. Engross yourself in a fantasy.

Taking the mind to a pleasurable place is one of the best ways to remove it from the association of pain—particularly if you think of a sexual fantasy. The theory behind this is that emotions and sexual thought are processed in the thalamus, a region of the brain also associated with pain receptors.

According to researchers at Duke University, people who suffered from chronic pain, but had daily spiritual or religious rituals had less pain, better moods, and more social support overall.

Harnessing the mind to unlock potential is only one of the reasons to meditate regularly. Turns out, people who meditate alter their brain’s cortex, which affects a brain’s sensitivity to pain. So if you don’t yet have a daily mediation practice, here’s another reason to start.

For those with rheumatoid arthritis, staying active is a daily struggle – but also a daily necessity. Research has found that rheumatoid arthritis sufferers who listened to music were able to walk 30% farther than those who walked in silence. Once again, it’s not so much that the pain was removed, but that their perception of the pain was diminished by taking their focus away from what hurts.

According to research, there’s something in the smell of a crisp, green apple for those suffering from migraine attacks. More research is being done, but it could have to do with the momentary distraction, or the chemical compounds found in the apple itself that are thought to reduce muscle contractions in the head and neck, thus reducing the migraine pain. 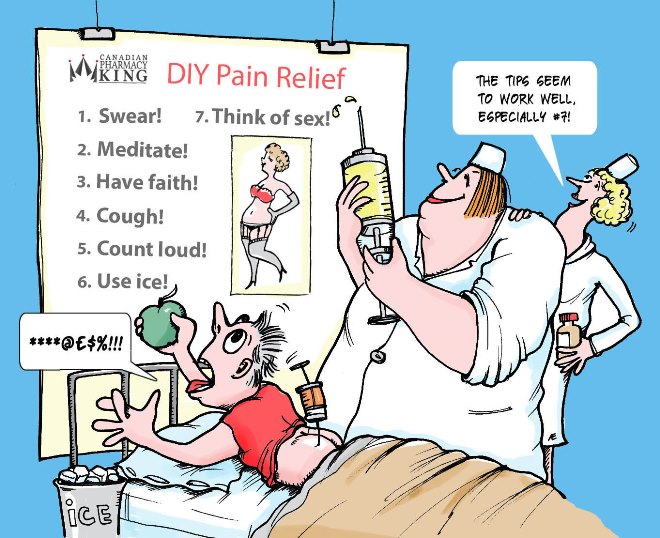 10. Sniff or use peppermint oil.

Peppermint oil has lots of uses, not just those related to pain. However, studies have shown that sniffing peppermint oil, or placing it directly on the skin can reduce the perception of pain.

11. Surround yourself with happy people.

For those suffering with chronic pain, surrounding yourself with your best friends and people who make you happy can go a long way to making you feel better. When you spend time with family and friends who make your life happy, you tend to look on the brighter side of things, and seek out healthier ways to manage pain.

12. Swear your little heart out.

Researchers from Keele University found that for those of us who don’t swear often, there’s an added pain relief in swearing. However, for people who swear more than 60 times a day, the effects become less potent because the word becomes neutrally associated in their brains. So save your four-letter words for when you’ve hurt yourself!

Perhaps not strange at all, but you’d be amazed at the myriad of applications for ice. You can use it to reduce inflammation after an injury, or to locally anesthetize your skin, to slow muscle spasms, and decrease tissue damage.

When it really comes down to it, managing pain is a lot about learning to train your brain to ignore it. Whether it’s taking your mind off the pain by swearing, fantasizing, or listening to music – or utilizing an external source like green apples, or peppermint oil, it comes down to redirecting the brain’s response to pain. I’d be willing to wager there are plenty more ways to control pain, just by putting your mind elsewhere momentarily.

We hope you’ve enjoyed this list of ways to manage pain, but we’d love to hear from you, too. Do you have other ways you’ve used to get over pain? If so, leave us a comment below.