<< A Medical Prescription to Reduce Racism? 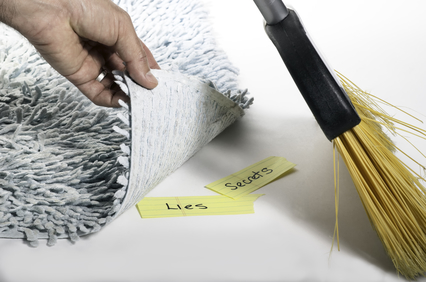 by Boyrcr420, despositphotos.com
Everyone has things they’d rather not say, and at the very least, hope to keep private. Not because they are necessarily bad, but because they don’t need to be discussed in open public forum. However, some families have a much more destructive pattern of communication, which can ultimately lead to estrangement, distrust, deter new relationships, and even preventing personal growth. There is a difference between privacy and secrets.

Privacy is simply the state of being unobserved. For example, changing your clothing. Keeping something private may include our fantasies and daydreams, feelings about the way the world works, and even our spiritual beliefs. When revealed, these private thoughts give another person some insight into the revealer.

Secrecy is the deliberate act of keeping something hidden. Secrecy can spill into privacy, not all privacy is secrecy. Fear and shame are generally the driving forces behind keeping something secret. Secrets consist of information, which has the potential to have negative impacts on someone else emotionally, physically, or financially.

While keeping something private is a part of life, when we cross the line into keeping a potentially harmful secret, it can have dire consequences, particularly in family units.

Generally, when families keep secrets, there are four main ways they shape and scar those who keep them:

1. Inhibit relationships with anyone outside the family. If you’re encouraged not to speak about your upbringing, your family, or your life, it’s hard to develop a true relationship with anyone who is not already on the inside. When you can’t be open and honest with your partner, distrust sets in – which can eventually lead to bigger problems.

2. Divide family members. Whether you’re in the know, or not – secrets have the power to divide. As does the truth. Estrangement is not uncommon when family members hold secrets.

4. Can cause illness and inhibit personal growth. In the long run, secrets cannot only cause serious illness (like anxiety and depression), but they can also inhibit normal personal growth (like boundary setting). Physical symptoms can also manifest, such as headaches, backaches, and digestive problems when secrets are internalized, rather than dealt with.

My life was certainly altered by family rules, secrets, and truth being told. The lessons I’ve learned were painful, but invaluable, too. The past three years have made me a much stronger, more independent, and capable woman.

Here is my story.

Don’t Tell Anyone Our Business

Certain family members of mine have always held the belief that you must keep all family business private. I’ve always found it a bit odd, since as far as I was aware, there wasn’t anything overtly bad going on in our “family business". Sure, we have our fair share of issues – struggles with alcoholism is one that many of my family members share throughout generations, not to mention mental illness, etc.… but because of this, I was always raised to have acceptance for people who are different, or to be understanding of those who struggle. It’s not to say that you accept poor behavior, but that you don’t judge them until you’ve walked in their shoes. Until recent years, I thought my family was the epitome of freethinking and non-judgmental. I’ve learned, however, that I can also be a bit naive. I have a tendency to look to the good in people, while keeping blinkers on to their more distasteful sides.

You see, in my family, I’ve always been the truth-seeker, and truth-sayer. I don’t mind talking to people, understanding perspectives, seeing both sides to a story. I also don’t struggle with any of the issues I listed above, as some of my family members do, so perhaps my truth stings a bit more. My truth extends to my own life as well; I am in no way immune. When I went through the very difficult decision to divorce three years ago, I learned whom the true non-judgmental family members and friends were. Not only that, but my eyes began to open to a very dysfunctional family system that can hide itself under the guise of freethinking. In actuality, it’s a codependent structure with very little boundaries, which will definitely toss family members others aside to protect itself.

When I brought my now husband into the picture, it was only three months after ending things with my ex. Truth be told, many people didn’t like that I could bring another man into the picture so soon. None of them seemed to listen to the many times over the years I’d expressed unhappiness, or even tried to end the thirteen-year marriage. For me, I’d fallen out of love so long before that it didn’t feel fast. It felt like the slow death I was dealing with had suddenly been cured, or a curse had been lifted.

I was happy and proud to introduce my new man to my family because he’s amazing. However, that’s when I learned everyone assumed he was the reason for my divorce—that I’d been having an affair with him. Interestingly, my husband is from England, as some of you may know. So it’s pretty much impossible to have an affair, at least in the nitty-gritty sense. However, I’ll be the first to admit that we grew close while I was still married. We began as author friends, and talked about thousands of topics. Yet, when I realized that my feelings had shifted from Twitter-friend to something more, I did some serious soul searching and ended my marriage. I needed to walk with integrity and it wasn’t fair to my ex—nor to me—to live a lie. Believe me, it would have been easy to carry on. To hold it as a secret, while staying secure where I was. After all, the man I had feelings for lived half a world away and he had his own family to contend with, too. I wasn’t ending things so we could be together; I was doing it for myself and the life I needed to live. At the time, there was no intention for him to come to the United States; that conversation came after I dropped the bombshell.

Explaining to family and friends that a man was coming over from England to meet me was definitely difficult. I was keenly aware the timing of it could be an issue for other people because my ex had been a part of the family for over fifteen years altogether. In the long run, I decided that I was living my life for me—not them. What I didn’t expect from my honesty was the backlash that still followed. Friends dropped like flies, as if I had the scarlet letter branded on my forehead. The worst, though, was the way my own mother and father betrayed me. Their attitudes toward us deteriorated rapidly. While they put up with him at first (clearly thinking he was a rebound and would be on his merry way soon), they eventually did everything they could think of to tear us apart—right down to threatening to get my husband deported. They staged “fights" hoping to get my husband in trouble with the law. When that didn’t work, they made false accusations that he was abusive—a lie which worked on my youngest brother who thinks my husband tore our family apart. They made dealing with them as unbearable as possible. It became a clear fight of him, or them. I was made to choose. As you can imagine, I chose my husband. Throughout all of it, he stood by my side, helped me see the bigger picture, and encouraged me to stand up for myself. It’s been two and a half years since I last dealt with my parents and my life has been better for it. Better, not easier. Having to walk away from a volatile family is hard. Being abandoned by them is equally painful.

Sometimes, I wonder if their reaction was less about me and more about them. At first, I believed my ability to change my life in the manner I did was too much for them to handle. Now, through years of therapy, I’m finding there is perhaps more to it than that. While I was still inside the codependent family dynamic, having alcoholics and mental illness in the family was no big deal. It was life. But by bringing an outsider in, a vocal and self-assured Brit at that, they were and still are threatened. Ironically, I’ve learned that appearances are everything to my family. Some of them would rather live a lie rather than face the truth. Perhaps there’s more to it than that, but I’ll never truly know. I’m just happy to be me, living the life I had dreamed of living with a man I adore and all of our wonderful children.

If you are living with a family secret, consider the way it affects you. Do you need to go into therapy to find a way to move past the secret? Are you happy keeping family secrets in lieu of possibly hurting someone with the truth? Leave us your comments below. And as always, remember to discuss any concerns with your doctor or therapist.