Home | Blog | The Link between Bipolar Disorder and Obsessive-Compulsive Disorder 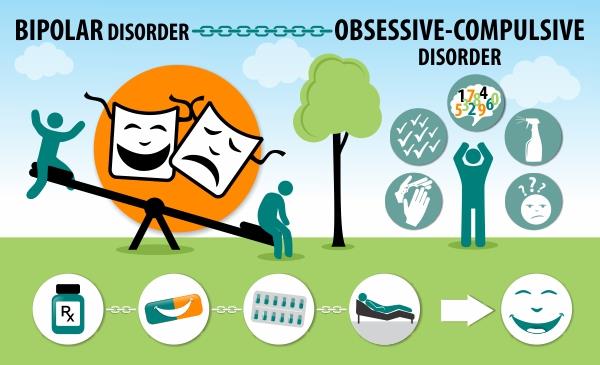 On their faces, these two disorders seem to be very different as one is primarily seen in mood changes while the other typically manifests in thought and action changes. However, recent research has shown that obsessive-compulsive disorder (OCD) and bipolar disorder, commonly occur together and also run in families.

People with both bipolar and OCD tend to have a higher number of depressive episodes overall and may have more antidepressant-induced mania or hypomania. Obsessive-compulsive symptoms tend to be worse during depressive episodes and improve during mania or hypomania. This data suggests that obsessive-compulsive symptoms are secondary to bipolar symptoms.

Additionally, according to Impact of Comorbid Anxiety Disorders and Obsessive-Compulsive Disorder on 24-month Clinical Outcomes of Bipolar I Disorder, people with both disorders have a decreased chance of remission within a two-year period.

While this data does not prove genetic linkage, it is suggestive of it and proves as a useful basis for further study.

According to Treatment of Comorbid Bipolar Disorder and Obsessive-Compulsive Disorder: A Systematic Review, most people with bipolar and comorbid OCD require multiple mood stabilizers or mood stabilizers plus atypical antipsychotics in treatment. It was rare that the addition of an antidepressant led to clinical remission (only noted in one study) so antidepressants were noted as not being necessary in most cases. Psychotherapy may also be helpful for those suffering from both conditions.

In all, while the presence of both illnesses may tend to worsen treatment outcomes, treatment is possible.

Your post has moved the debate fordarw. Thanks for sharing!