<< The Music Sheet of The Heart 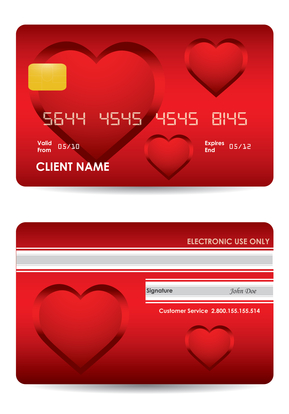 by place4design, despositphotos.com
Who would have thought this was a thing? Yet, funnily enough, it is. I guess it makes a bit of sense, now that I think of it. We live in a country consumed by numbers: How many Twitter followers do you have? Do you have more Facebook friends than me? How many likes did I get for that post? And so on…

If your credit is less than stellar, and you’re trying to attract a mate, experts are saying that rather than pumping your time and money into making your appearance better – you should work at bringing up your credit score.

In some ways, though, I simply can’t relate. I met my husband on Twitter, of all places. And if I were basing our relationship on his credit score, there would have been no chance. Not because his credit score stunk, but because he didn’t have one. Period. At least, not a United States based credit score. He lived in England at the time, therefor the credit he had built his entire life didn’t jive with anything we have in place over here. As it turned out, our banker told us that his credit score was much like that of an 18-year-old boy, just starting out. I’m not going to lie, it kinda stunk at first. It took us two years to build enough credit on his side to be able to get our own house. But overall, that was the worst of it. Mostly because my husband and I have a very similar stance on finances and how to acquire what it is we really want.

I realize though, that not everyone is as lucky as I’ve been when it comes to finding a partner and triumphing over his (non-existent) credit score. There are people out there who are simply not financially responsible. At all. And that could be very evident in asking the almighty question of, “What’s your credit score?" The next question to ask yourself is, “Does their credit score even matter?"

You need to know what your goals are in life. Do you plan to buy a house together? Own a nice car? Have the ability to travel? What kinds of finances are required to live the life you want? If you already own a car and a home, perhaps your partner’s initial finances aren’t that important to you. However, your finances could be important to your partner. The key is really to know your goals, then to communicate smartly with him/her. Ideally, sooner, rather than later.

Having an open, honest dialogue about finances, where you want to go in life, plans that involve money, etc. can actually help derail the most common cause of divorce in our country – money squabbles. The theory is that if you know your partner’s financial responsibility level before investing a lot of time, you’re also arming yourself with knowledge before you dive into deeper waters. If financial security is high on your list, knowing their financial health while you’re still dating can be a way to eliminate candidates before you spend a lot of time with them, or possibly even have your own credit ruined by their irresponsibility.

So what if your partner or potential partner isn’t the issue – you are? Does your credit score hover on or below 600? Do you even know your credit score? Here’s an interesting statistic: 96% of women find financial responsibility more attractive in assessing a romantic partner than physical attractiveness (87%). Wow, that says a lot! For men it's a tighter race, with 92% favoring attractiveness to financial responsibility (91%). Additionally, 20% of men said they would not marry a woman with a low credit score, while 30% of women said the same about their male partner.

The good news is that bad credit is a fixable problem. That is, if the party with the smelly score wants to make a change for the better.

Tips to improve your credit score, and your dateability:

You can’t improve something you aren’t informed on. So numero uno is to get informed. Visit sites like freecreditreport.com to get a comprehensive look at what your score looks like.

2. Get rid of errors

Comb through the reports and see if there is anything on there that should be deleted, resolved, or could be flat out wrong. Start a dispute on them and get them to investigate the error. The Federal Trade Commission reports that 5% of all credit reports have some kind of error on them. Yours could be one of them.

You can make a statement any time there's a dispute on your report that you can't get removed. You may have to be Twitter concise though, since you only get about 100 words to say your piece. But according to make lenders, that can make all the difference.

If you have credit cards, loans, etc. that you aren’t paying, it’s important to get yourself back in good standing. Defaults are one of the main reasons scores go south. So if you can, start overpaying the defaulted accounts. If that’s not possible, pay the minimum balances, and contact the lender to see if there are any breaks they can offer you. If all else fails, think about at this point is a settlement. The average settlement with creditors comes in at about 20% less than the balance beforehand. That can be huge if you’re in over your head and need a better way to pay it down.

According to many experts, having new credit with a clean record is an important aspect of repairing your credit. So don’t make the mistake of foregoing new credit all together. If you’re trying to repair the mistakes of the past, get something new and remember to keep your balances below the 30% mark. Another tip: aim to have your new credit limit at least $1000 or higher for maximum benefit.

Whether you’re someone who believes financial responsibility is the most important aspect when looking for a mate, or just someone who finds it in their top 10 traits – one thing is for sure: understanding your own credit score comes first. Then you need to decide if ruling out a potential partner due to past financial mistakes is as important as other areas of compatibility. Personally, I find good communication, affection, and the ability to balance life as equals comes first. If you have those things, financial responsibility will also balance itself out naturally because you’re working off the same playbook as a team. But those qualities can sometimes be as hard to find as a 800 credit score, so follow your instinct, trust yourself, and most importantly be open and ready for a frank conversation about your finances with a new partner.