Bipolar Medications by paulistano, despositphoto.com
When treating bipolar disorder (bipolar depression or bipolar mania/hypomania) a psychiatrist has many medications from which to choose. Typically, though, a doctor will choose a medication approved by the United States Food and Drug Administration (FDA) for that specific indication first. Doctors, however, do always have the options of prescribing medications approved for other uses as well.

Wishing You A Very Merry Christmas 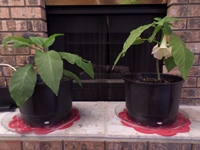 A Merry Christmas to All Our Coworkers and Customers!

A Taiwanese friend bought me this gorgeous plant as a Christmas Gift. It is called Angel's Trumpet or Brugmansia, which is a tropical plant longs to the family called Solanaceae.

The leaves of Brugmansia are 6-8' long. The flowers are trumpet-shaped and can grow up to 20' long. They can come in shades of white, pink, peach, yellow or orange.

Those photos were taken on Nov 29 from Candrug's Merry Christmas Party 2014.