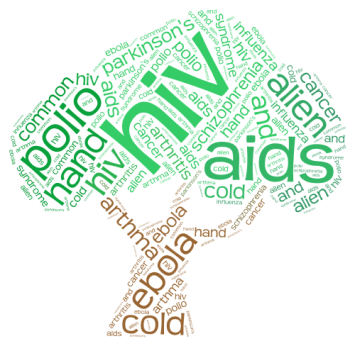 Life is hard, but we’ve made great strides and progress in the way of medicines and cures. However, there are still a few maladies that elude our keen sense of innovation and are (at least at this time) incurable once contracted. Every medical advancement takes time, but for people who have one of these ten medical issues, a cure can’t come soon enough.

So without further ado, here’s the list of diseases and illnesses that can’t be cured:

Human Immunodeficiency Virus (HIV)/Acquired Immunodeficiency Syndrome (AIDS) are feared for the simple fact that there is no cure and no vaccine to protect us from contracting it. HIV is similar to other viruses, including those that cause the flu or the common cold - but with an important difference. Over time, your immune system can clear most viruses from your body, but that isn't the case with HIV. For whatever reason, the human immune system can't seem to get rid of it. This means that once you have HIV, you have it for life. In some cases, this can develop into the final stage and full-blown syndrome known as AIDs. People at this stage of HIV have such badly damaged immune systems, which puts them at risk for opportunistic infections (OIs). If AIDS is acquired, medical treatment and intervention is a requirement to prevent certain death.

While there are two vaccines for polio, if the actual disease is contracted, there is no cure. Polio or poliomyelitis is an acute viral infection, which attacks the nervous system. It usually begins with general symptoms such as fever, headache, nausea, fatigue, and muscle pains and spasms. For roughly 90% of those contracting this disease, it stays that way. However, polio is sometimes followed by a more serious and permanent paralysis of muscles in one or more limbs, the throat, or the chest – giving it the nickname of infantile paralysis. More than half of all cases of polio occur in children under the age of five and if contracted under the age of one – the disease has been known to be fatal.

This one has been a hot topic and all over the news lately. With a fatality rate of 50%-90%, and the recent rash of cases this year alone, it’s no wonder people are so freaked out by it. Part of the filoviridae virus set, ebola can cause extreme fever, rash, and profuse hemorrhaging – both internally and externally. While a vaccine is currently in development, nothing is available to the public.

This one is of particular interest to me, as I have an uncle who suffers from this mental illness. With schizophrenia, the person cannot logically distinguish the difference between reality and fantasy within their own minds. The symptoms prominently include delusions, hallucinations, non-coherence of thought and speech. If not diagnosed, a person with schizophrenia can be of great detriment not only to him or herself, but also to the people around them.

With the recent news of Robin Williams, not to mention the very open case of Michael J. Fox, Parkinson’s Disease is gaining more limelight. In our bodies, nerve cells use a brain chemical called dopamine to help control muscle movement. With patients who have Parkinson's disease, the brains cells that make dopamine slowly die, making it hard to control your muscles. This can result in muscular tremors, muscular rigidity, and slow, imprecise movement. Most people with PD are diagnosed sometime after the age of 50 – but it can be found earlier, as was the case with Michael J. Fox, who was diagnosed at age 30.

SEE ALSO: Exercise Your Way to a Healthy … Brain?

This one goes down as one of the more bizarre incurable diseases. Straight out of a b-rated horror flick, alien hand syndrome (AHS) is a rare neurological disorder in which one hand functions involuntarily, with the victim completely unaware of its actions – and in some cases, unable to control or stop those actions. The syndrome typically arises after trauma to the brain, after brain surgery, or after a stroke or an infection of the brain. Because there’s currently no cure or treatment for AHS, all a person suffering from this disease can do to control the problem is to keep the hand busy by having it hold an object, or keeping it restrained. There are some cases where symptoms have lessened when the afflicted part of the brain begins to heal, however.

This one affects my household, and I’m sure you know someone who suffers as well. Asthma is a lung disorder that presents itself the form of episodes of breathlessness, wheezing, coughing, and chest tightness that range in severity from mild to life threatening. Inflamed airways become hypersensitive to different forms of stimuli like dust mites, animal dander, pollen, air pollution, cigarette smoke, medications, weather conditions, and even exercise. While there is no cure – there is a treatment in the form of various steroidal inhalers, making this affliction much more manageable.

According to the Centers for Disease Control and Prevention (CDC), there is no cure for most types of arthritis – only ways to manage it. Arthritis is a chronic disease that causes pain of the joints and is associated with increased levels of uric acid in the body. While some people develop arthritis with age, others might have it even from childhood. It’s important to note that there are many different types of arthritis, and the ones we are talking about here are not brought about due to an infection or virus.

Cancer is actually more than 100 different diseases all characterized with one thing in common: the uncontrolled growth of abnormal cells in the body. Cancer affects one in three people born in developed countries such as the United States and Canada – and are a major cause of sickness and death throughout the rest of the world. While there is no cure, significant gains have been made since the 20th century, mainly through a combination of timely and accurate diagnosis, selective surgery, radiation therapy, and chemotherapeutic drugs. Such advances actually have brought about a decrease in cancer deaths, despite not being able to stop it from the start.

The common cold is an acute respiratory virus that affects millions of people each year. Anyone with a small child knows just how quickly and brutally it can attack. With a typical incubation of only 1-4 days, the cold spreads quickly as it hops from person to person. Influenza, on the other hand, is a severe form of cold. With this virus, the lungs can fill with water, making breathing near on impossible and hospitalization eminent. Flu can quickly become an epidemic as we have seen in the cases of swine flu and bird flu. The worst part is that, flu virus keeps mutating and evolving continuously, which is why you have to update your flu shot/vaccine each year.

As with any disease or illness, prevention and proper treatment is key. A little knowledge also goes a long way. If you, or someone you know has one of these diseases – be sure to talk to your doctor about the best ways to manage symptoms and stay as healthy as you can be.

Posted in History and Medical Insights