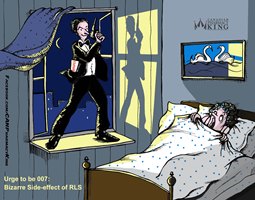 Even if you don’t take any medications yourself, I’m sure you’ve at least seen a commercial on TV for some of the more popular ones on the market right now. Somewhere near the end of the commercial is a list of possible side effects (usually ranging from headaches, nausea, vomiting, etc.). However, there are also many rare side effects that have no other way to describe them other than… bizarre. They’re often so rare that you’ll never hear about them in commercials, but they certainly exist.

Here’s a list of our top 10 rare-but-bizarre side effects:

We wanted to start off with one of the really weird side effects we've found. Criminal masterminds in novels would be so lucky to have this one accidently happen. Xeloda is known to carry side effects known as hand-foot syndrome. This can result in peeling of the skin, bleeding and development of ulcers or blisters around the hands and feet. It also causes the very rare side effect of making your fingerprints completely disappear. Fingerprints do make reappearances once use of the drug has been stopped.

In this day and age, many people have the notion that baldness is not only a sign of aging, but also of weakness, and even impotency. No guy wants to feel like that, right? Little did users of the drug Propecia know it can cause a strange affliction known as gynecomastia and I’m sure it’s one side effect many men would likely choose hair loss over having. Why? Well, basically it causes some men to develop fully functional breasts – complete with mammary glands and the ability to lactate.

3. So You Wanna Be a Vampire

Ever wonder what it would feel like being a vampire in full-daylight? Look no more. Levaquin has a strange side effect known as phototoxicity. This disorder results in near-immediate sunburn - which can be as extreme as a 3rd degree burn! On a twist of irony, this bizarre side effect could require treatment from the very medication that caused it in the first place. Can you say Catch-22?

I get that Restless Leg Syndrome can be cumbersome. However, one of the bizarre side effects from taking Mirapex and Requip might result in circumstances worse than poor circulation and accidently kicking your spouse in your sleep. Some patients on Mirapex and Requip have experienced an increased desire to engage in activities like gambling and drinking. Some have even reportedly become alcoholics or gambling addicts. Other's have strong sexual desires they might not normally have – and worse yet, some have the inability to control those urges. For various reasons, obsessive compulsiveness over gambling, drinking, and sex could be far more complicated than RLS.

People are well aware of the unseemly side effects of taking a drug meant to cause an erection – but what about the more unusual ones? In some patients taking Viagra, the loss of blood flow to the optic nerve can result in no longer being able to distinguish the difference between the colors of blue and green. Worse yet, those men who feel a little bolder – and take more than the prescribed amount – can even have something called “blue-vision". This side effect causes the patient to see everything with a deep blue tint. Now think about that for a moment. If so much blood is flowing elsewhere that you no longer can see any color but blue, there certainly isn’t enough blood flowing to your brain and helping you make sound decisions, either.

So since we’re on the topic of erection-inducing drugs, we may as well keep the train of thought… erm… up. While everyone knows that Viagra can cause some pretty hefty (and albeit scary) erectile issues – many people don’t know that the popular antidepressant Zoloft also comes with a similar warning. Capable of producing a 3-hour or more prolonged erection, Zoloft also comes with the downer of “ejaculation failure". So while you might be able to keep going all night long – the ending sequence will likely fall flat. No bueno.

7. Who Needs a Nose Anyway?

Patients taking Vasotec can experience problems with all five senses; however, the strangest of these is an inability to smell – a condition known as anosmia. Oddly enough, it can also cause ringing in the ears, blurred vision, and dry eyes. While comparatively minor – if all of them at the same time are being experienced, you’ve just been bumped up to the stop-taking-this-drug category.

Although total amnesia is rare, there are some prescription drugs that can also cause amnesia. Two such drugs are Lipitor and Mirapex (which as you remember from earlier can bring about some other weird side effects). Both drugs have been known to cause short-term memory loss, and in some cases more long-term. The good news is that going off the drugs seems to jump-start memories back up.

9. Sleep Right Through It

Users of the drugs Ambien and Lunesta typically take the drugs in the hopes of curing their insomnia and help them to get a better night sleep. While that may be the case, one of the stranger side effects of this drug could be the ability to do things while you’re sleep. We aren’t just talking sleepwalking here, either. Activities have been known to include: eating, making phone calls, having sex, and driving -- yep, driving. Some patients taking these sleep aids have woken up in the middle of driving down the road, or shopping at the local 24 hour grocery store. Some have even been arrested for driving while impaired, waking up in a jail cell with no recollection of what happened or why they are there. Both of the drug makers do include warnings about these side effects and emphasize that under no circumstance should they be taken with alcohol (which has been known to exacerbate the effect).

This one tops off the bizarre-o list of side effects from drugs. We all know that what you eat and drink (or if you’re dehydrated or not) can play a roll in the color of our urine. But did you know some drugs can actually change the color to an unnatural state?

Here’s a list of some potential urine colors and the drugs that can cause them:

This color can be the result of taking Flagyl, furazolidone, or several other antibiotics. Aldomet, which has been used to treat high blood pressure in pregnant women, can make urine appear as if it's black because it darkens upon contact with bleach – which is often found in the water inside the toilet.

This color can be a side effect of taking phenolphthalein, which has been used as a laxative.

This color can be the result of taking Elavil, an antidepressant also used to treat bed-wetting in children, or Robaxin, a muscle relaxant used to treat muscle spasms.

The irony in this one can't be denied. Blue urine can be a side effect of taking Dyrenium, a diuretic, or methylene blue, a chemical compound used in medications like Urised to help reduce irritation caused by bladder infections.

We know some of these side effects are kinda silly, while others are downright scary. We hope that no matter what prescriptions you take, or may take in the future, that you follow the safety guidelines and report any unusual side effects to your doctor immediately – not matter how bizarre they might seem.

True facts revealed about certain drugs. Many people are unaware about these issues. Thanks for sharing.

What you don't know can hurt you. The more you know about any medication you use, the better you can be sure you're using it properly. For each medication you take, whether it's a prescription medication or an over-the-counter drug, you can remember or Note a chart to be sure you understand what the medication does and how to use it.