Innovative Uses for Music Therapy on Pregnant Moms and Preemies

Music is as old as time itself and as profound as we allow it to be. Those who listen can find music even in the most mundane things; the hum of the furnace against the ticking of the clock, and the rotating of the dryer! Or perhaps the gently melody in blades of grass bending to the wind, mixing with the sound of crickets nearby. Research has shown that music can drastically affect our physiology, and our neurology, right down to our perception of pain.

Music therapy as a source of healing has been around for centuries. In fact, Plato is known to have said, "Music affected the emotions and could influence the character of an individual."

Five New Rx Drugs to Keep Your Eye On

Prescription drugs are forever evolving and new therapies are being added to the mix every year to make people's lives just a little bit better. Since August of last year, the FDA has approved five new drug therapies and we think you should know about them. Each offers a unique solution to various diseases or disorders ranging from helping alleviate rosacea to treating epilepsy.

Keep Your Mind Sharp with 6 Tips

As we get older, we’ve been told it is normal for our brains to shrink in size and our memory to be compromised. However, Alzheimer’s and Dementia are not inevitable to our future. In fact, brain mass loss can be slowed down or halted all together with a little bit of knowledge.

Here are 6 tips provided by CanadianPharmacyKing.com to keeping your mind healthy as you age:

Ask Your Google Glass or Pharmacist? 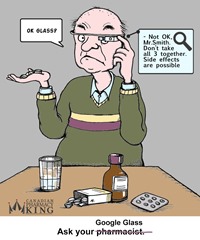 Google Glass is a wearable computer which was developed by Google. It has already been found very useful in many areas of life including healthcare. For example, It can provide a patient with information on side effects and instructions such as whether to take the medication with food. Also the researchers found that Google Glass can help patients with Parkinsons, by providing visual cues to wearers that help them unblock their brains and regain their movement.

Posted in Cartoons and Comics, History and Medical Insights | No Comments »

Attachment parenting, Helicopter mom, Free-Range kids, Tiger mums. Meh. I’ve never been a fan of labels. Especially not ones that pigeonhole people into believing they fit into some magical one-size-fits-all scenario. It’s like high-school all over again. I didn’t conform to those rules then and I doubt I’ll ever adhere to others that take their place.

Throughout my career as a parent (because oh yeah, it’s work!), I’ve found myself to be many things, not just one. I’ve gone through stages where one could consider me an attachment mother; I co-slept and breastfed both of my children. I had body slings and Baby Bjorn’s to keep them close to me. I also ensured there were covers on electrical switches and gates on my stairway. I did my best to prevent injury when I saw the likelihood occurring.

When an accident or injury occurs, your primary concern is your child's health and safety. Most cases of childhood illness are not serious, and can be handled with treatment at home or with the advice and treatment of your pediatrician. Timely treatment can help alleviate symptoms and reduce the chances of an illness becoming more serious over time.

Emergencies most often occur when there is a sudden injury from a fall, bicycle or car crash, an incident with a firearm, nonfatal drowning, electrical shock, burns or smoke inhalation. Some basic rules to follow in any injury emergency include: 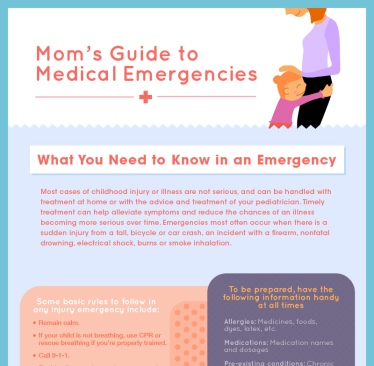 Posted in Infographic, Parenting Board | No Comments »