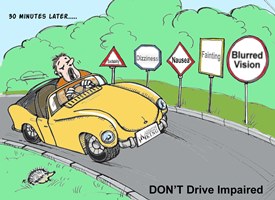 If you have taken your medication and thinking about driving after that, think twice. Do not put yourself and those around you at risk. There are many alternatives to driving yourself. Call a taxi, use public transport, ask a friend or a relative to drive instead, or just walk.

Driving Under The Influence of Medications – Part 2: The Solutions

Do you take one (or more) prescription medications?

Driving Under The Influence of Medications – Part 1: The Problems

Of the nearly 314 million people in America, nearly 70% (220 million) have taken a prescription medication this month and of those, a whopping 50% (110 million) have taken two or more. With that in mind, it’s a pretty safe bet you are one of the millions who have taken a medically prescribed drug this month. However, if someone asked you whether or not your medication impairs your driving, would you know? Or are you like the majority of us who aren’t sure?

Did you know there are roughly 6 million car accidents each year in America? A study from the National Highway Traffic Safety Administration (NHTSA) found in 2009 that 18% of fatally injured drivers tested positive for at least one illicit, prescription, or over-the-counter drug. That’s 1,080,000 people and likely on the rise.

Can Medications Make You a Better Mom? 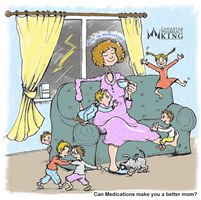 Sadness, anxiety, pessimism, insomnia, irritability, fatigue are range of unpleasant but normal maternal emotions. But for some moms the only way to "fight" them is taking psychiatric medications. Then the world seems a less terrifying place to raise children, stress becomes more manageable, but...

Posted in Cartoons and Comics, Parenting Board, Whats Trending | No Comments »

The Top 10 Most Expensive Prescription Medications

In a sense, we hope you haven't heard of the drugs on this list before now. They make the top 10 most expensive list because they are all combatting rare disorders. Patients utilizing these drugs often have no choice but to rely on these six-figure medications because there are few, if any other, options for treatment.

1. SOLIRIS - $409,500 per patient, per year (You could buy a condo outright in Huntington Beach, California for this price.)

It's true; we enjoy keeping our readers well informed, and on their toes. So with that in mind, we have our first Canadian Pharmacy King Pop Quiz to help you uncover some great information you definitely want to know about. Now's the time to get some insights you may have missed, but most of all have some fun!

1.) What should you be sure to have with you if your medicine is confiscated while traveling?

c. A letter from your doctor